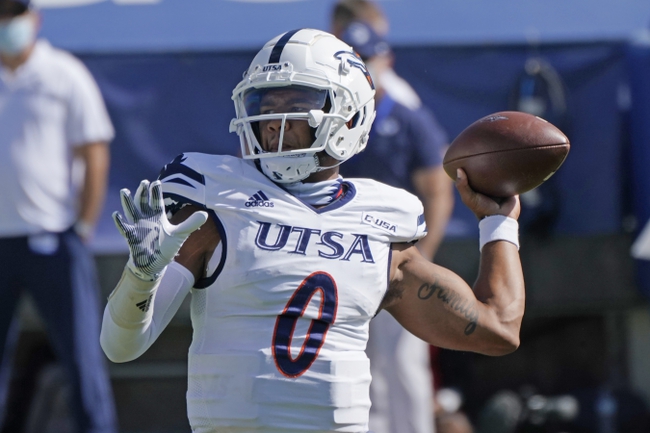 The UTEP Miners and the UTSA Roadrunners meet Saturday in college football action from the Alamodome in San Antonio.

UTEP enters this one at 3-3 overall this year. The Miners have lost consecutive games to Louisiana Tech and Charlotte in their last two outings. As for UTSA, they’re 4-4 so far. The roadrunners are 1-1 in their last pair with a win over Louisiana Tech and a loss to Florida Atlantic. Check back all season long for free college football picks at Sports Chat Place.

UTEP has had some mixed results this season so far, but for the most part the Miners have been competitive. After opening up at a nice 3-1 on the year (with a 59-3 loss to Texas), the Miners haven’t done so well; they’ve fallen 21-17 to LA Tech and 38-28 to Charlotte.

In the loss to the 49ers, UTEP quarterback Gavin Hardison put up 204 yards with two touchdowns and two interceptions. Justin Garrett led the receivers with nine grabs for 107 yards and two touchdowns, and Deion Hankins posted 18 carries for 119 yards and a touchdown.

Over on the UTSA side, it’s been a pretty mixed bag in 2020 as well, The Roadrunners started out at 3-0, then lost three straight. Since then, UTSA has a 27-26 win over Louisiana Tech and a 24-3 blowout loss at the hands of Florida Atlantic.

In the loss to the Owls, UTSA quarterback Frank Harris tossed for 109 yards on 12-of-26 passing, and also led the rush with 66 yards from 14 carries. Joshua Cephus was the top Roadrunners receiver on five catches for 63 yards.

PICK: I’m going to stick with UTEP here, but probably staying away from this one in reality. It’s been a long layoff for both teams, and it’ll be difficult to know what to expect here. That said, UTSA has been at 20 points or fewer in four of their last five games (against some tough opponents, granted) so I’m hesitant to trust them on a good total here. If the Miners can get off to a good start in this game I like UTEP to keep pace and cover.