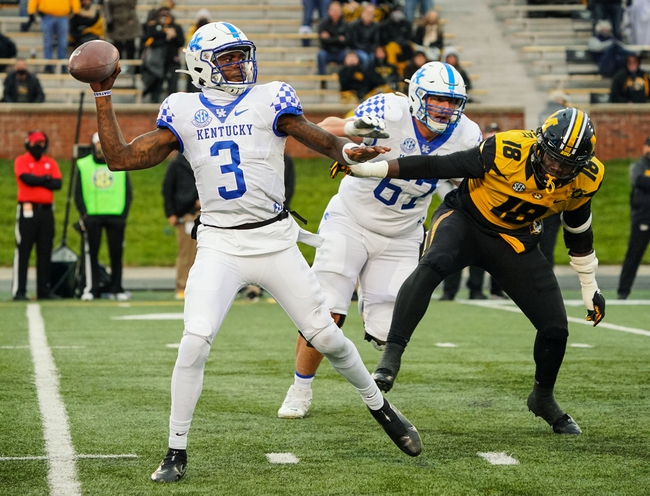 The Vanderbilt Commodores travel to Lexington to take on the Kentucky Wildcats as they meet in SEC college football action from Kroger Field on Saturday afternoon.

The Vanderbilt Commodores will be on the hunt for their first win of the season after a 24-17 loss to Mississippi State last time out, falling to 0-5 as a result. Ken Seals has thrown for 1,066 yards, 6 touchdowns and 8 interceptions on 67.1% passing while Keyon Henry-Brooks has a team-high 253 rushing yards with 2 rushing touchdowns. Ja’Veon Marlow and Jamauri Wakefield each have 100+ rushing yards as well this season. Cam Johnson leads Vandy with 33 catches for 338 yards while Henry-Brooks has 207 receiving yards and Amir Abdur-Rahman, Ben Bresnahan and Chris Pierce Jr. each have 100+ receiving yards this season. Defensively, Jaylen Mahoney leads Vanderbilt with 33 total tackles including a team-high 18 solo tackles while Dayo Odeyingbo has a team-high 3.5 sacks.

The Kentucky Wildcats will try to rebound from back-to-back losses after a 14-3 loss to Georgia in their last game to fall to 2-4 on the year. Terry Wilson has thrown for 602 yards, 4 touchdowns and an interception on 61.4% passing while also sitting 2nd on the team in rushing with 251 rushing yards and 3 TDs. Chris Rodriguez Jr. has a team-high 413 rushing yards and 4 touchdowns while Asim Rose Jr. has 242 rushing yards this season. Josh Ali far and away leads Kentucky’s receiving group with 31 catches for 328 yards this season. Defensively, Jamin Davis leads Kentucky with 58 total tackles and 31 solo tackles with a pair of interceptions while Kelvin Joseph has a team-high 3 interceptions and Jamar Wesson has 3 sacks to lead Kentucky in that regard this season.

You have a Vanderbilt team that has issues scoring the football against a Kentucky team that’s done nothing but play in low-scoring games for most of the season. Outside of the game against Ole Miss in game two, Kentucky’s other five games have all seen 42 points or less, three of those games finishing at 30 or under. I think this is another low scoring kind of game where the first to 20 wins, so I’ll take the under in this one.