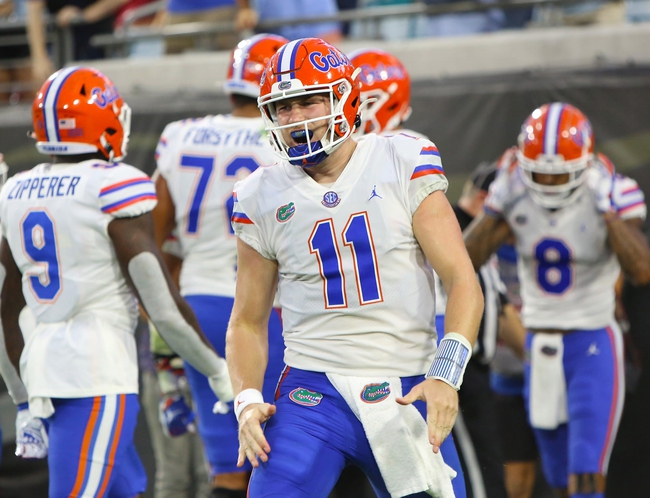 The Arkansas Razorbacks visit the Florida Gators as they meet Saturday in SEC college football action from Ben Hill Griffin Stadium in Gainesville.

Arkansas comes into this one at 3-3 this year. The Razorbacks are 2-1 in their last three games with a loss to Texas A&M between wins over Mississippi and Tennessee. As for the Gators, they’re sitting at 4-1 this year. Since Florida’s loss to Texas A&M, the Gators have beaten Missouri and Georgia in their last pair of games. Check back all season long for free college football picks at Sports Chat Place.

Arkansas has had a pretty choppy season so far, with a few embarrassments and a few flashes of potential greatness. The Razorbacks have been scoring pretty well over their last four games, with at least 24 points in each outing. Arkansas’ latest win came 24-13 over Tennessee this past weekend.

In the win over the Volunteers, Arkansas quarterback Feleipe Franks posted 215 yards with three touchdowns, and Trelon Smith led the rushing attack with 72 yards off nine carries. Treylon Burks was the top receiver for the Razorbacks there with 95 yards and a score off five catches.

Over on the Florida side, they’ve really only had one misstep this season—a 41-38 loss at Texas A&M. Outside of that, it’s been four wins for the Gators, each coming by 14 points or more. Florida’s latest victory came last weekend 44-28 versus Georgia.

In the win over the Bulldogs, Florida quarterback Kyle Trask posted 474 yards with four touchdowns and an interception, while Malik Davis caught five passes for 100 yards. Dameon Pierce managed 52 yards with a touchdown on 15 carries to lead the rush as well.

PICK: I’m going to stick with Florida. The Gators have put on an offensive clinic this season, posting at least 38 points in every game. Although they’ve allowed some teams to stay within range, the Florida offense has been moving at such a good clip that not many squads can keep pace. I like Arkansas to hang around initially here, but this one should be all Gators.