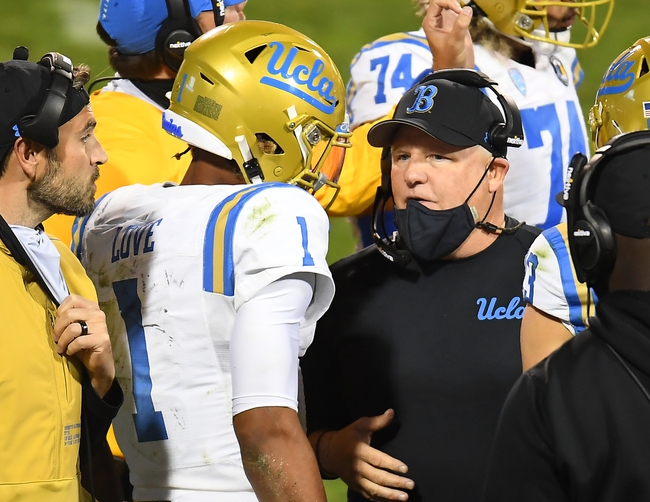 The California Golden Bears had their season opener against Washington along with a game against Arizona State canceled due to COVID-19 issues. The California Golden Bears have won four of their last six road games. Chase Garbers returns at quarterback after throwing for 1,700 yards and 14 touchdowns while completing 61 percent of his passes. Cal has its top receiver returning in Nikko Remigio, who had 513 receiving yards and three touchdowns, while the Golden Bears have their top rusher in Christopher Brown Jr., who had 914 yards and eight touchdowns. Defensively, Kuony Deng returns after 119 tackles last season, Cameron Goode led Cal with 9.5 sacks and Daniel Scott had one interception. Cal has some question marks at key positions and is a bit young in terms of its overall roster, but Garbers did show promise last year and he has his top playmakers returning. Cal could surprise and put a scare in a team or two in this short Pac-12 season.

The UCLA Bruins lost their season opener to Colorado and hope to avoid a third straight 0-2 start, and they were supposed to play the Utah Utes on Saturday. The UCLA Bruins have lost four of their last six home games. Dorian Thompson-Robinson is completing 50 percent of his passes for 303 yards, four touchdowns and one interception. Thompson-Robinson has two or more touchdown passes in five of his last seven games. Greg Dulcich and Demetric Felton have combined for 172 receiving yards and two touchdowns while Kyle Philips has three receptions. The UCLA Bruins ground game is averaging 175 yards per contest, and Thompson-Robinson leads the way with 109 yards and one touchdown. Defensively, UCLA is allowing 48 points and 525 yards per game. Stephan Blaylock leads the UCLA Bruins with 11 tackles, Caleb Johnson has one sack and Quentin Lake has one pas deflection.

The California Golden Bears haven't played in ages and now getting a new opponent on short notice can't exactly help their game plan. The UCLA Bruins lost to Colorado in their season opener and didn't show much on the defensive side, but they showed a lot of promise on offense and that's encouraging under coach Chip Kelly. UCLA has to be the favorite here based on how explosive they looked offensively in their opener and the fact Cal hasn't played in almost a full year. However, I'll give a more concrete pick out once we get a line.

Update: This line makes little sense to me, as we're getting the team that's played a game, at home and free points. I like UCLA to win this game outright.