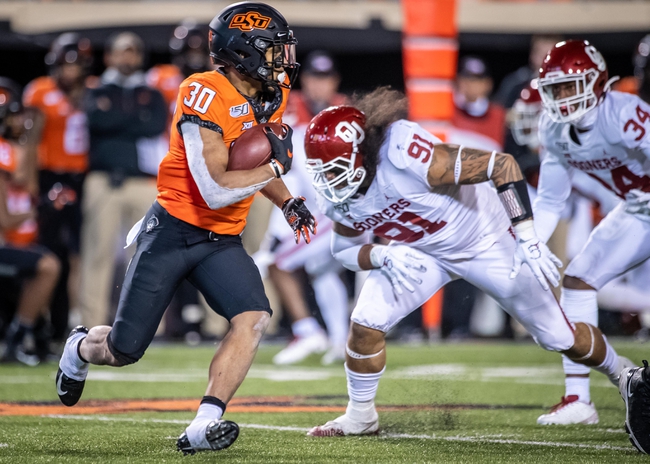 The Oklahoma Sooners host the Oklahoma State Cowboys as they meet in another edition of Bedlam in Big 12 conference college football action from Memorial Stadium in Norman on Saturday night.

The Oklahoma State Cowboys will look to build on their 5-1 overall record and 4-1 mark in conference play after a 20-18 win over Kansas State last time out. Spencer Sanders has thrown for 766 yards, 5 touchdowns and 3 interceptions on 67.7% passing while Chuba Hubbard leads OK State with 581 rushing yards and 5 TDs and I.D. Brown has 372 rushing yards as well this season. Tylan Wallace leads Oklahoma State’s receiving group with 35 catches for 588 yards and 4 touchdowns while Dillon Stoner and Braydon Johnson each have 150+ receiving yards as well this season. Amen Ogbongbemiga leads Oklahoma State’s defense with 43 total tackles while also logging 2.5 sacks. Tre Sterling has 39 total tackles with a team-high 29 solo tackles and Malcolm Rodriguez is right behind with 38 total tackles including 28 solo tackles. Calvin Bundage has a team-high 3.5 sacks while Tyler Lacy and Trace Ford each have 3 sacks. Kolby Harvell-Peel has a pair of INTs as well for the Cowboys’ defense this season.

This is a hard one to call as it’s a rivalry game to begin with, but this is a lot of points to be laying against an Oklahoma State team that’s been really good this season. The problem is that Oklahoma State tends to rely on their defense to get the job done and with the way Oklahoma’s been piling on the points lately (albeit against inferior competition), I just don’t know if the Cowboys will be able to keep up. The one conference game that Oklahoma State scores more than 27 points in, was the overtime loss to Texas, the same Longhorns team that Oklahoma hung 53 on and beat in overtime as well. Oklahoma State’s M.O. is to bring their opponent down to their level and I just don’t think the Cowboys can do that. The Sooners have also won the last 5 meetings between the two, with four of those wins coming by double digits, so I’ll lay the points with the Sooners in this one.