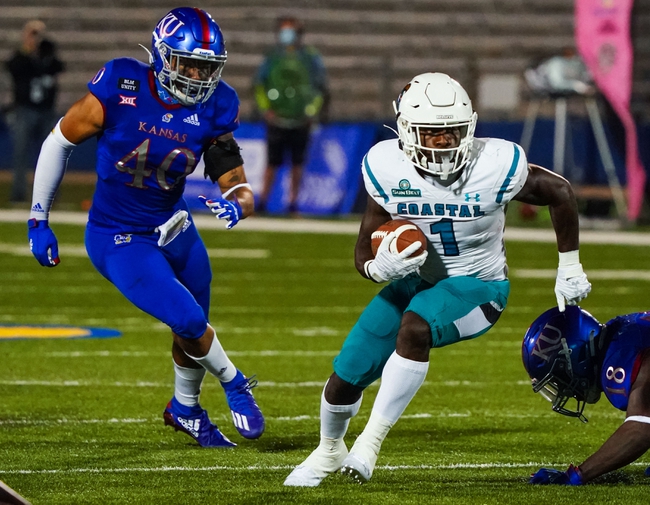 The Coastal Carolina Chanticleers host the Appalachian State Mountaineers as the best in conference meet in a Sun Belt conference college football matchup from the Teal Turf of Brooks Stadium on Saturday afternoon.

The Appalachian State Mountaineers will look to build on their current 5-game winning streak and 6-1 overall mark after a 17-13 win over Georgia State last time out. Zac Thomas has thrown for 1,285 yards, 12 touchdowns and 5 interceptions on 66.5% passing while Daetrich Harrington leads the Mountaineers in rushing with 595 rushing yards and 7 TDs this season. Camerun Peoples and Marcus Williams Jr. each have 350+ rushing yards with Peoples logging 366 rushing yards and 4 TDs. Thomas Hennigan leads App State in receiving with 367 receiving yards while Malik Williams has a team-high 25 grabs for 291 yards and a pair of scores and Christian Wells has 179 receiving yards and 3 TDs. On defense, Trey Cobb leads the Mountaineers with 54 total tackles while Demetrius Taylor has a team-high 4.5 sacks and Brendan Harrington and Ryan Huff each have 3 interceptions this season.

The Coastal Carolina Chanticleers will try to remain unbeaten after improving to 7-0 on the year and 5-0 in conference play after a 23-6 win over South Alabama in their last time out before their last matchup against Troy got postponed. Grayson McCall has thrown for 1,393 yards, 16 touchdowns and 1 interception on 69.6% passing while also rushing for 271 yards and 4 TDs. CJ Marable leads the Chanticleer rushing attack with 370 rushing yards and 5 TDs while Reese White has 309 rushing yards and Sherman jones has 268 yards on the ground with both White and Jones logging 3 rushing TDs this season. Jaivon Heiligh leads Coastal’s receiving group with 35 grabs for 610 yards and 6 scores while Isaiah Likely has 232 receiving yards with 3 TDs and Sam Denmark is right behind with 231 receiving yards. Kameron Brown has 204 receiving yards with 3 TDs and the aforementioned CJ Marable has 154 receiving yards with 5 scores. On defense, Silas Kelly leads Coastal with 52 total tackles including 30 solo tackles and 4 sacks while Enock Makonzo has 30 solo tackles as well and Tarron Jackson has a team-high 6 sacks. C.J. Brewer has 5 sacks and Jeffrey Gunter has 4 sacks while D’Jordan Strong has a team-high 3 interceptions this season.

The case for App State is that the Mountaineers have been in this type of high-stakes, high-profile, high-pressure game before as the class of the Sun Belt for the last couple of years. The problem is that App State also can’t cover a spread if their lives depended on it this season, and have yet to step up in competition this season as three of App State’s last four games come against teams with a combined record of 14-3 in Coastal, Georgia Southern and Louisiana with a date against Troy being the only outlier and the Trojans are still a .500 team in conference and 4-3 overall. The Chanticleers were ready for Troy but the postponement gave Coastal a couple of extra days to prep for this game. Coastal Carolina’s also been the team to beat this season and already proved they can get the job done when they went on the road and beat Louisiana outright as almost double-digit dogs. I think that the moment isn’t too big for Coastal Carolina here, so look for the Chanticleers to step up and win this game by a touchdown at the very least. I’ll lay the points with Coastal Carolina here.