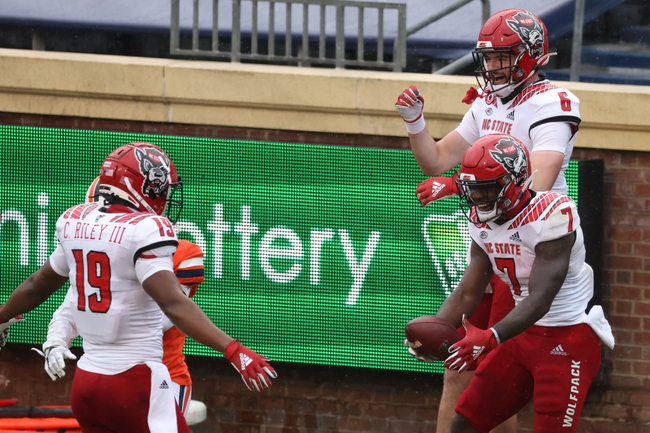 The NC State Wolfpack host the Liberty Flames as they meet Saturday in Week 12 college football action from Carter-Finley.

Liberty rolls into this one at 8-0 on the 2020 college football season. The Flames have beaten Syracuse, Southern Miss, Virginia Tech and Western Carolina in their last four games. As for NC State, they’re 5-3 this season. The Wolfpack had consecutive losses to North Carolina and Miami, but won their last game versus Florida State. Check back all season long for free college football picks at Sports Chat Place.

Liberty had a couple of tough escapes in their first two games (30-24 against WKU and 36-34 versus FIU), but since then none of their victories has been close outside of a 38-35 win over Virginia Tech. The Flames kept it going last weekend against Western Carolina, cruising to a 58-14 win.

In the victory over WCU, Liberty quarterback Malik Willis threw for 306 yards and three touchdowns while also leading the rushing attack with eight carries for 97 yards and two touchdowns. Kevin Shaa was the top receiver for the Flames there with 137 yards and a TD on two catches.

Over on the NC State side, they’ve held pretty strong against some tough competition this season. The Wolfpack have a couple of relative blowouts among their three losses (45-24 to Virginia Tech and 48-21 to UNC) but hung with Miami in a tough 44-41 defeat a couple games back. NC State’s latest win came 38-22 over Florida State back on Saturday.

In the win over the Seminoles, NC State quarterback Bailey Hockman posted 265 yards with two touchdowns and one interception, while Zonovan Knight had 94 yards rushing with a TD off 17 carries. Thayer Thomas was the top receiver there with 11 catches for 135 yards and two scores.

PICK: I’m going to stick with NC State in this one, but this should be a pretty darn good matchup regardless. Liberty looks like the real deal this season; the Flames have picked off the likes of Western Kentucky, Syracuse and Virginia Tech, and have been scoring consistently in every outing. The Wolfpack offense has been pretty impressive this year as well however, with 30 or more points in six of eight games. This should be a high-flying matchup, and when the dust settles I like NC State on a cover.