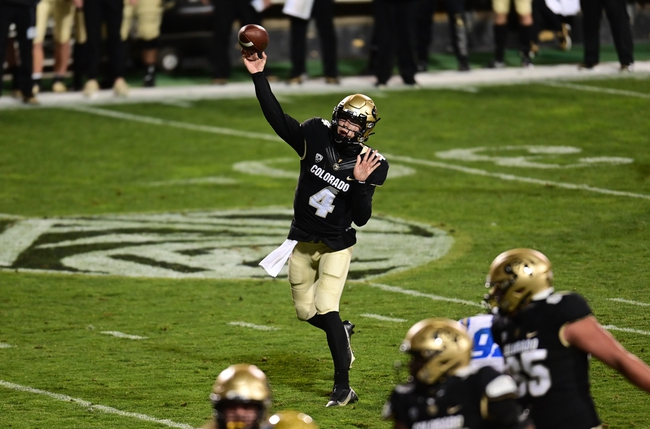 (NOTE: This game has been cancelled due to positive virus tests and will be ruled a no-contest.) The Arizona State Sun Devils and the Colorado Buffaloes meet Saturday in college football action from Folsom Field.

Arizona State is 0-1 so far this season, with a tough one-point loss to USC back on November 7 being the only game they’ve been able to play. As for Colorado, they’re 2-0 on the year. The Buffaloes have dispatched UCLA and Stanford in their first two outings. Check back all season long for free college football picks at Sports Chat Place.

Arizona State has a single game in the books this year, a 28-27 loss to USC. The Sun Devils had a 24-14 lead going into the fourth quarter of that game, but were outscored 14-3 in the final frame for a frustrating defeat. Arizona State was scheduled to play California this past weekend but that game was cancelled due to several positive virus tests on the team, including head coach Herm Edwards.

In the loss to USC, Arizona State quarterback Jayden Daniels posted 134 yards and a touchdown, while Rachaad White led the receivers on three catches for 70 yards and a score. Daniels (111 yards; 11 carries) and DeaMonte Trayanum (84 yards; 12 carries; 2 TDs) were the main contributors to the running game there.

Over on the Colorado side, it’s been two victories—and two very close games—so far. The Buffaloes escaped UCLA in their opener 48-42, then were in for another tough one at Stanford this past weekend. Colorado was able to hang on and take that one 35-32 to move to 2-0.

In the win over the Cardinal, Colorado quarterback Sam Noyer logged 255 yards, two touchdowns and an interception. Jarek Broussard rushed 27 times for 121 yards, and Dimitri Stanley had six catches for 126 yards and a touchdown.

PICK: I’m going to stick with Colorado here. Arizona State had a pretty nice showing against USC—and nearly pulled off the win—but I think the long layoff will be detrimental to the team’s early-season rhythm and it’ll take them a while to get going here. The Buffaloes will certainly have to keep the gas pedal down offensively and also prevent another strong running-game showing from the Sun Devils (who had 258 yards on the ground in their first game), but I’m more comfortable with Colorado.