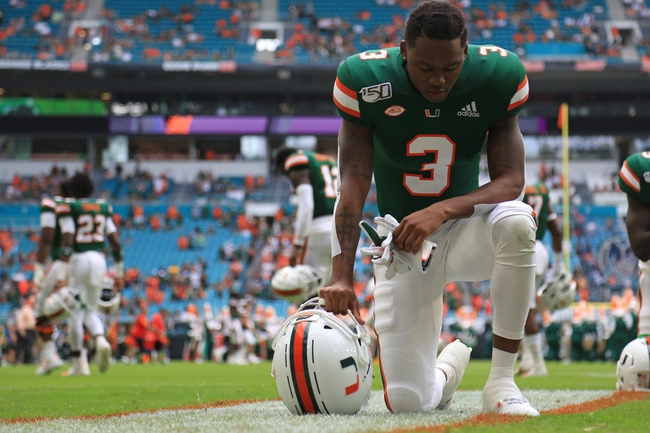 This Game Has Been Postponed.

The Miami Hurricanes look to build on their four-game winning streak to stay in the CFB playoff race. The Miami Hurricanes have won five straight home games. D’Eriq King is completing 63.7 percent of his passes for 2,086 yards, 17 touchdowns and four interceptions. King has two or more touchdown passes in four of his last seven games. Mike Harley and Mark Pope have combined for 931 receiving yards and six touchdowns while Dee Wiggins has 27 receptions. The Miami Hurricanes ground game is averaging 167.1 yards per contest, and Cam'Ron Harris leads the way with 471 yards and six touchdowns. Defensively, Miami is allowing 24.8 points and 389.9 yards per game. Bubba Bolden leads the Miami Hurricanes with 43 tackles, Jaelan Phillips has five sacks and Al Blades Jr. has two interceptions.

The Georgia Tech Yellow Jackets have had an extra week to prepare for this game, but I'm not sure how much it's going to matter given their offensive limitations. Georgia Tech struggles to move the ball and is ranked 105th in college football in points scored. The Miami Hurricanes are playing their most consistent ball of the season right now, got a confidence boosting win on the road against Virginia Tech and King is really carrying this club into possible playoff contention in the final stretch of the season. If Georgia Tech can't find the end zone in this game, it's going to get ugly.

There's better betting options out there in week 12, but I'd lay the points with Miami if forced to pick.