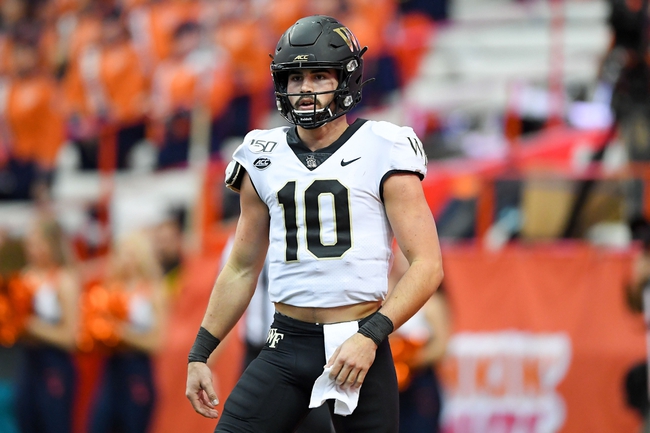 THIS GAME HAS BEEN POSTPONED.

Wake Forest enters this matchup at 4-3 so far. The Demon Deacons had a four-game win streak snapped by North Carolina in their last outing. As for Duke, they’re 2-6 this year. The Blue Devils are 1-2 in their last three games, beating Charlotte and falling to NC State and North Carolina. Check back all season long for free college football picks at Sports Chat Place.

Wake Forest has had a choppy season thus far, but for the most part the team has been competitive. Of the Deacons’ three losses, just one was by more than six points (37-13 to Clemson). Wake Forest lost to NC State 45-42 on September 19, and also fell to North Carolina 59-53 last weekend.

In the six-point loss to the Tar Heels, Wake Forest quarterback Sam Hartman posted 429 yards with four touchdowns, and Christian Beal-Smith rushed for 120 yards on 17 carries. Donavon Greene (170 yards; two TD) and Jaquarii Roberson (167 yards; two TD) led the receivers in that one.

Over on the Duke side, there’s not as much good news, but the team has shown flashes of potential in 2020. The Blue Devils didn’t really get close in their first three games, but lost to Virginia Tech by just seven and were able to beat Syracuse the next week. Since then it’s been an 11-point loss to NC State, a blowout win over Charlotte and a blowout loss to UNC 56-24.

In the loss to North Carolina, Duke quarterback Chase Brice posted 155 yards and an interception. Mataeo Durant rushed for 132 yards and a score on 11 carries, and Darrell Harding had five catches for 70 yards.

PICK: I like Wake Forest here. Duke has had some tough teams on the schedule sure, but they haven’t been able to find much consistency on either side of the ball. The Devils have given up 24 or more points in seven of eight games this season, and that doesn’t bode well considering the Demon Deacons’ scoring capabilities. I think Wake Forest will look pretty good in this one.