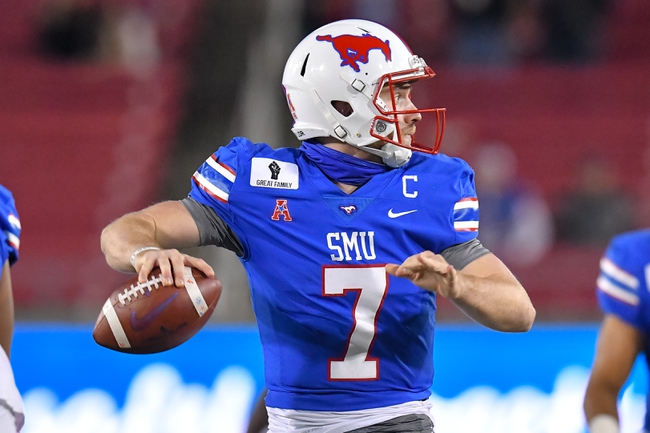 THis game has been POSTPONED

The Houston Cougars will look to get back above .500 after a 56-21 win over USF last time out. Clayton Tune has thrown for 1,562 yards, 11 touchdowns and 6 interceptions on 60.6% passing while sitting 2nd on the team in rushing with 233 rushing yards and 4 touchdowns. Kyle Porter has a team-high 324 rushing yards and 4 TDs while Mulbah Car, Chandler Smith and Kelan Walker each have 100+ rushing yards. Keith Corbin leads Houston’s receiving group with 24 grabs for 333 yards while Marquez Stevenson has 278 receiving yards and a team-high 3 touchdowns. Nathaniel Dell and Tre’von Bradley each have 200+ receiving yards while Bryson Smith and Christian Trahan each have 100+ receiving yards this season. On defense, Grant Stuard leads Houston with 50 total tackles including 25 solo tackles while David Anenih has a team-high 4.5 sacks and Payton Turner isn’t far behind with 4 sacks this season.

The SMU Mustangs will look to build on their strong 7-2 mark in conference play despite a 28-24 loss to Tulsa last time out. Shane Buechele has thrown for 2,781 yards, 21 touchdowns and 4 interceptions on 64.7% passing while Ulysses Bentley IV has 877 rushing yards and a team-high 11 rushing touchdowns. TJ McDaniel and Tyler Levine each have 200+ rushing yards as well for SMU this season, but McDaniel is out for the year due to a leg injury. Rashee Rice leads SMU with 43 catches for 637 yards and 5 touchdowns while Kylen Granson has 509 receiving yards and 4 receiving TDs. Reggie Roberson Jr. had 22 catches for 484 yards and 5 TDs before going down for the year due to a knee injury while Danny Gray has 33 catches for 448 yards and 4 scores and Tyler Page has 34 grabs for 396 yards this season. Defensively, Delano Robinson leads SMU with 71 total tackles including 48 solo tackles and 3 sacks while Richard McBryde and Elijah Chatman each have 3 sacks as well, but it’s Turner Coxe who leads SMU with 3.5 sacks and Brandon Crossley has a team-high 4 interceptions for SMU this season.

In most years, seeing SMU/Houston on a schedule, my mind would immediately lean towards a shootout. However, Houston’s offense hasn’t been as consistent as I would’ve expected and the defensive efforts haven’t always been there either. SMU stumbled against Tulsa which is massive considering they need a lot of help to have a shot at making the AAC championship game, not to mention the Mustangs have to win out to have any hope of it since they lost the head-to-head tiebreaker with both Cincinnati and Tulsa, ironically their two losses this season. I think this game just means more in the grand scheme of things to SMU, so I’ll lay the points with the Mustangs at home in this spot.