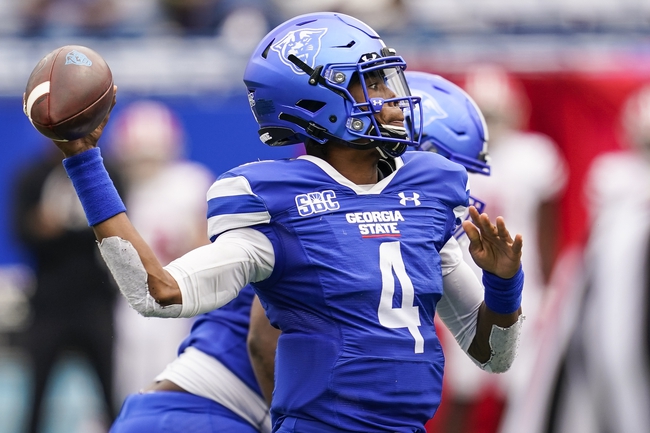 Georgia State comes in here at 3-4 so far. The Panthers are 1-2 over their last three games, beating LA-Monroe while otherwise falling to Coastal Carolina and Appalachian State. As for South Alabama, they’re 3-5 in 2020. The Jaguars are on a three-game losing streak right now, falling to Georgia Southern, Coastal Carolina and Louisiana in that time. Check back all season long for free college football picks at Sports Chat Place.

Georgia State has had a pretty wide variety of results so far this season, ranging from gritty wins to blowout losses. In the last trio, it’s been a 51-0 defeat by Coastal Carolina, a high-flying 52-34 win over LA-Monroe, and a tough 17-13 loss to Appalachian State.

In the loss to the Mountaineers, Georgia State quarterback Cornelius Brown posted 152 yards and a score on 11-of-33 passing. Tucker Gregg managed 10 carries for 85 yards, and Sam Pinckney had 74 yards and a score off four receptions.

Over on the South Alabama side, they looked pretty good over the first five games. The Jaguars scored 24 ore more points in four of those outings, kicking off the year at 3-2. Since then it’s been a 24-17 loss to Georgia Southern, a 23-6 loss to Coastal and a 38-10 loss to Louisiana.

In the loss to the Cajuns, South Alabama quarterback Desmond Trotter had 133 yards with a TD and an interception, while Terrion Avery led the rush with 14 carries and 62 yards. Jalen Tolbert had 64 yards on five receptions to lead the receivers there.

PICK: I’m going Georgia State here, though there’s not a ton to like about this matchup. South Alabama has had some difficult games lately, which helps explain their lack of production on offense, but they’ve still scored just 23 points combined over their last three outings. Georgia State has also gone flat in two of their last three, but I think the Panthers can regroup and eke out a cover in this one.