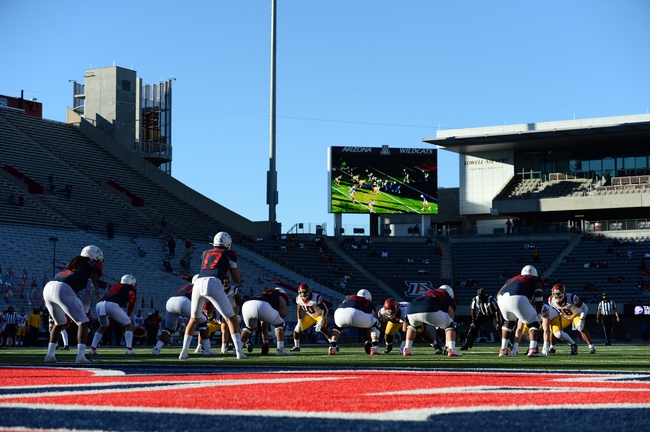 The Washington Huskies host the Arizona Wildcats when they meet in Pac-12 conference college football action from Alaska Airlines Field at Husky Stadium on Saturday night.

The Arizona Wildcats will look to bounce back after opening their season with a 34-30 loss to USC last time out. Grant Gunnell threw for 286 yards, 3 touchdowns and an interception on 24 of 36 passing while Gary Brightwell rushed for 112 yards on 21 carries. Tayvian Cunningham led Arizona with 110 receiving yards and a touchdown while Stanley Berryhill III had a team-high 8 grabs for 70 yards and a score and Jamarye Joiner had a touchdown reception as well in the losing effort. On defense, Rhedi Short led the Wildcats with 9 total tackles including a team-high 6 solo tackles while Jalen Harris, Rourke Freeburg and Aaron Blackwell each had two tackles for a loss in the defeat.

The Washington Huskies will be hoping to build off of a 27-21 win over Oregon State to start their season last time out. Dylan Morris threw for 141 yards on 14 of 24 passing while Sean McGrew led the Huskies on the ground with 91 rushing yards and a touchdown on 9 carries. Kamari Pleasant had 61 yards and a TD while the aforementioned Morris called his own number for a touchdown as well. Terrell Bynum led the Washington receivers with 4 catches for 55 yards while no other Husky had more than 19 receiving yards in the win. On defense, Edefuah Ulofoshio led the Huskies with 10 total tackles including 9 solo tackles while Zion Tupuola-Fetui had a pair of sacks and Asa Turner added an interception for Washington.

It’s not really good to make a heavy judgment after just one game, but this feels like way too many points to be laying with Washington. Sure, the Huskies got the win against the Beavers and did a good job running the ball, but Morris wasn’t overly effective at QB and there’s still some question marks at that position and I really think it’s going to take a couple of games with this coaching staff. The Wildcats lost Khalil Tate and JJ Taylor which were two big parts of last year’s team and the defense wasn’t great, but the Wildcats held their own against USC in spite of falling just short, and I think we could see a similar effort here. I’ll side with Arizona and the points in this game.