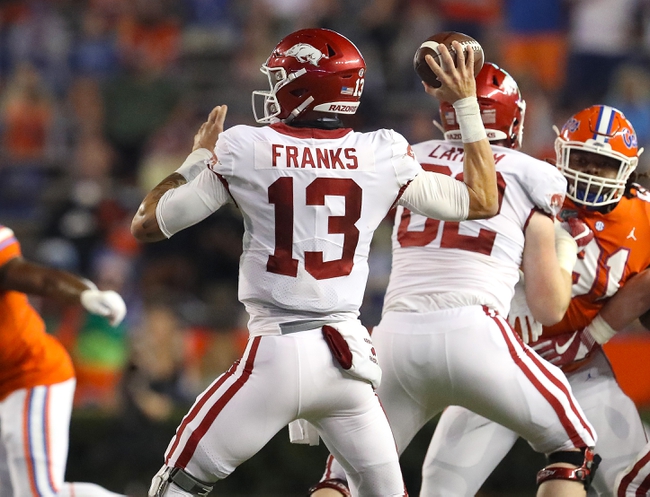 The Arkansas Razorbacks host the LSU Tigers when they meet in SEC college football action from Razorback Stadium in Fayetteville on Saturday afternoon.

The LSU Tigers will try to get back to .500, sitting at 2-3 after a 48-11 beatdown loss at the hands of Auburn last time out. Myles Brennan has thrown for 1,112 yards, 11 touchdowns and 3 picks on 60.3% passing this year, but he’s been ruled out for the season due to an abdominal injury. TJ Finley is expected to take over at quarterback after completing 66.7% of his passes for 408 yards, 2 touchdowns and 3 interceptions this season. John Emery Jr. has 246 rushing yards and 2 touchdowns while Tyrion Davis-Price is right behind with 245 receiving yards and a pair of touchdowns as well in the LSU backfield. Terrace Marshall Jr. leads LSU’s receiving group with 31 grabs for 540 yards and 9 touchdowns while Arik Gilbert and Jaray Jenkins each have 200+ receiving yards. On defense, JaCoby Stevens leads LSU with 36 total tackles while Damone Clark has 34 total tackles and Jabril Cox has 31 total tackles with a team-high 21 solo tackles. BJ Ojulari has a team-high 4 sacks and Eli Ricks leads the Tigers with 3 interceptions this season.

The Arkansas Razorbacks will look to rebound and get back to .500 after falling to 3-4 with a 63-35 loss to Florida last time out, alternating wins and losses for the seventh time in as many games this season. Feleipe Franks has thrown for 1,678 yards, 16 touchdowns and 3 interceptions on 68.3% passing while Trelon Smith has 441 rushing yards and Rakeem Boyd has 309 rushing yards with 3 touchdowns this season. Treylon Burks leads the Razorback receiving group with 34 catches for 508 yards and 5 touchdowns while Mike Woods has 413 receiving yards with 4 scores and De’Vion Warren has 278 yards and 3 TDs this season. On the defensive side, Grant Morgan leads Arkansas with 85 total tackles while Bumper Pool has 71 total tackles and Jalen Catalon is right behind with 70 total tackles, including a team-high 40 solo tackles and a team-high 3 interceptions this season. Hudson Clark also has 3 picks while Joe Foucha and Greg Brooks Jr. each have a pair of INTs and Eric Gregory has a team-high 2.5 sacks this year.

I considered LSU and the points as the Tigers have had a week to stew on the humiliation they suffered at the hands of Auburn in primetime in a marquee game. However, Myles Brennan has been ruled out for the season due to injury, and while TJ Finley had a good first start for LSU at QB, the fact is that the Tigers’ offense has stalled and just hasn’t been even a shell of what it was last year. Obviously losing pieces like Joe Burrow and Justin Jefferson will have a big impact, but this is bordering on bottoming out from one year to the next. Arkansas is already playing with house money after exceeding expectations so far this season with three  conference wins, three more than they had in the last three years combined, and while giving up a whopping 63 points to Florida is a red flag, the Hogs also scored 35 as a consolation and should have their head coach in Sam Pittman back on the sidelines for this game. I think that we see a focused effort from Arkansas here and the Hogs come out and win this game by at least a field goal, so I’ll lay the points with the Razorbacks in this game.