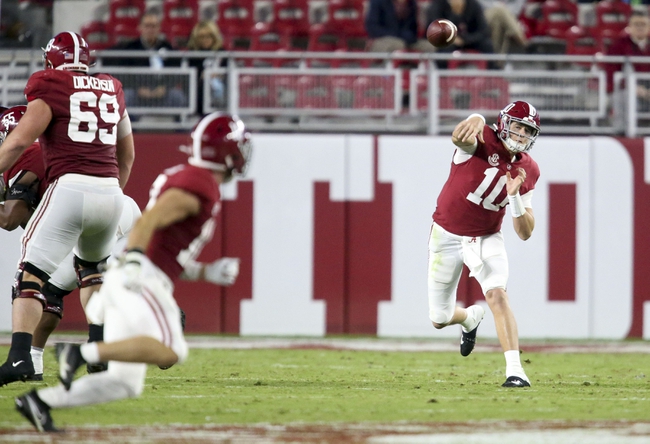 The Alabama Crimson Tide host the Kentucky Wildcats when they meet in an SEC college football matchup from Bryant-Denny Stadium in Tuscaloosa on Saturday afternoon.

The Alabama Crimson Tide will look to remain undefeated after climbing back to the top of the rankings with a 6-0 record and a 41-0 win over Mississippi State last time out before last week’s game against LSU was postponed due to COVID. Mac Jones has thrown for 2,196 yards, 16 touchdowns and 2 interceptions on 78.5% passing while Najee Harris leads the Tide in rushing with 714 rushing yards and 14 touchdowns. Brian Robinson Jr. has 206 rushing yards and Trey Sanders has 134 rushing yards this season. DeVonta Smith leads Alabama with 759 receiving yards and 8 touchdowns while Jaylen Waddle and John Metchie III each have 500+ receiving yards with Waddle logging 557 yards and 4 touchdowns in just four games before being ruled out for the season over three weeks ago while Metchie III has 517 yards and 3 TDs this season. On defense, Dylan Moses leads Alabama with 50 total tackles including 29 solo tackles while Christian Harris has a team-high 30 solo tackles this season. Daniel Wright and Malachi Moore each have a pair of interceptions as well this season for Bama.

This is a ton of points to be giving up with an Alabama team that doesn’t have the same defensive intensity as we’ve seen in years past, and the lack of tackling was glaringly obvious against teams like Ole Miss earlier this season. However, while the road team’s dominated this matchup in recent years, I just don’t trust this inconsistent Kentucky offense against Alabama. Sure, Kentucky put up 38 points last time out, but that game was against Vanderbilt and the Wildcats also gave up 35 points to a pretty bad Commodore offense in that game. Kentucky’s had scoring issues for much of the season and before the Vanderbilt game, Kentucky scored just 13 points combined against Georgia and Missouri, two teams that Alabama is far superior to, at least in the case of Missouri. I just think that with Alabama back atop the rankings with an extra week to prepare for this game, is not a situation I’d want to be on the other side of. Kentucky’s in trouble here. Give me Alabama and lay the points in this one.