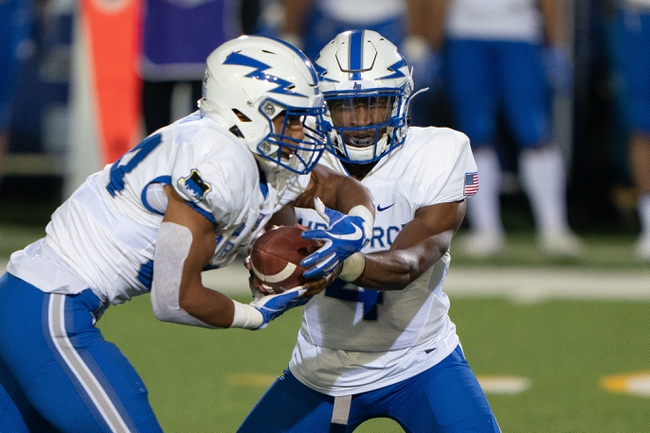 This game has ben canceled.

Colorado State enters this one at 1-2 on the season. The Rams have a win over Wyoming with losses to Fresno State and Boise State otherwise. As for Air Force, they’re sitting at 2-2 this year. The Falcons have losses to San Jose State and Boise State alongside wins over Navy and New Mexico. Check back all season long for free college football picks at Sports Chat Place.

The Rams have faced some tough teams over their first three games and stumbled out of the gate at 1-2. Colorado State kicked off the season with a 38-17 loss to Fresno State, but then managed a solid 34-24 win over Wyoming. The Rams’ latest effort was a 52-21 blowout loss to Boise State.

In the loss to the Broncos, Colorado State quarterback Patrick O’Brien posted 140 yards and an interception, and A’Jon Vivens led the rushing attack with 76 yards and a score on 12 carries. Dante Wright was the top Rams receiver there with five catches for 109 yards.

Over on the Air Force side, they’ve got two big wins and two tough losses so far this year. The Falcons opened with a 40-7 win over Navy, then fell to San Jose State 17-6 and Boise State 49-30. In their last game on Friday however, Air Force took a nice 28-0 shutout win over New Mexico.

In the win over the Lobos, Air Force quarterback Haaziq Daniels threw for 66 yards and ran for 55 and a TD on 12 carries. Brad Roberts did most of the work on the ground for the Falcons in the victory, tallying 177 yards and three touchdowns on 28 carries.

PICK: I’m going to stick with Air Force here. Colorado State’s loss to Boise State was a weird one; the Rams held the Broncos to just 291 yards of total offense, but also gave up three non-offensive touchdowns that pretty much swung the course of the game. Add that to a 1-of-15 third-down-conversion rate (even against a good Broncos team) and I don’t have a ton of confidence in Colorado State right now. Air Force has been scoring pretty well so far so I think they’ll be just fine in this one.