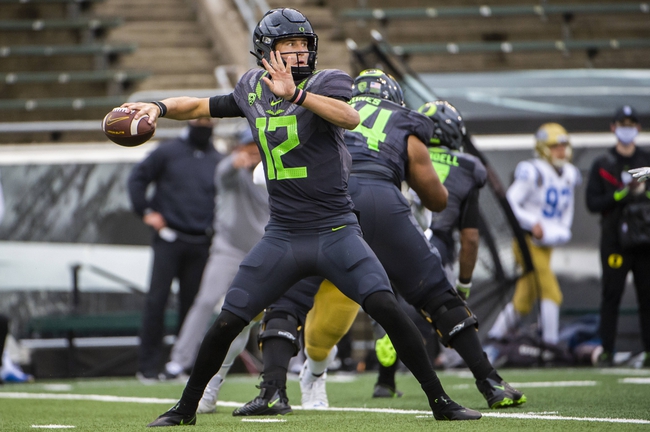 The Oregon State Beavers host the Oregon Ducks when they meet Friday in college football Pac-12 rivalry action from Reser Stadium in Corvallis.

Oregon has looked pretty good so far this year through three games, but did have a tight escape this past weekend. The Ducks didn’t have much trouble with Stanford in a 35-14 win or Washington State in a 43-29 win during their first pair. The UCLA game was tight however, as Oregon eventually prevailed 38-35.

In the win over UCLA, Oregon quarterback Tyler Shough posted 334 yards with three touchdowns on 19-of-30 passing. Travis Dye managed 10 carries for 40 yards, and Devon Williams led the receivers on 123 yards from six grabs.

Over on the Oregon State side, they started the year out pretty shaky but have gotten progressively better as the games come along. The Beavers fell to Washington State 38-28 in the opener, then got a little closer against Washington in a 27-21 loss. Oregon State got their first win this past weekend versus California 31-27.

In the win over Cal, Oregon State quarterback Tristan Gebbia put up 147 yards, one TD and two picks on 12-of-20 passing. Jermar Jefferson added 18 carrels for 196 yards and a score, and Teagan Quitoriano led the receivers on four catches, 65 yards and a TD.

PICK: I’m going to stick with Oregon in this one. The Beavers have been pretty permissive on defense so far, giving up at least 27 points in each game. The Ducks have surrendered a combined 64 points in their last pair themselves, but they’ve also countered by scoring a combined 81 in that time. The Oregon State offense can move pretty well when they’re clicking, but I don’t think they’ve got the stamina to keep up with Oregon on the scoreboard here.