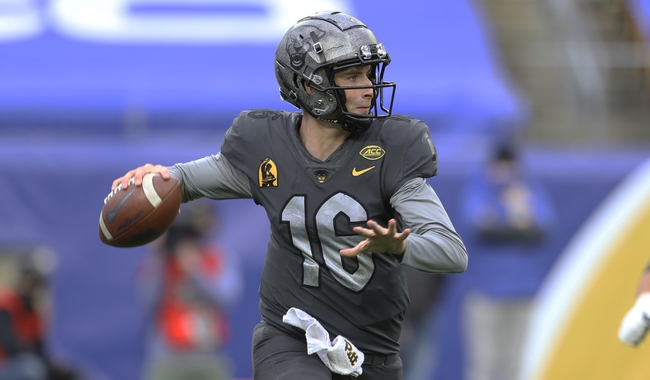 Pittsburgh comes into this one at 5-4 overall. The Panthers have won their last two consecutive games, taking out Florida State and Virginia Tech in that time. As for Clemson, they’re 7-1. The Tigers are coming off their first and only loss of the year so far, falling in overtime to Notre Dame on November 7. Check back all season long for free college football picks at Sports Chat Place.

Pittsburgh got off to a nice 3-0 start with wins over Austin Peay, Syracuse and Louisville. The Panthers then went on a four-game losing streak, falling in close games to NC State and Boston College prior to double-digit losses to Miami and Notre Dame.

The game against the Fighting Irish was never close after the first quarter, and end up a 45-3 Pittsburgh loss. Panthers quarterback Joey Yellen posted 101 yards and three interceptions on 10-of-27 passing. Vincent Davis managed eight carries for 28 yards to pace the rush, and Jordan Addison had three catches for 40 yards.

Over on the Clemson side, they marched out of the gate with six straight double-digit victories, taking out Wake Forest, the Citadel, Virginia, Miami, Georgia Tech and Syracuse with relative ease. The Tigers escaped Boston College 34-28 on Halloween, then suffered their first loss of the year November 7 against Notre Dame, 47-40 in double overtime.

Clemson quarterback DJ Uiagalelei managed 439 yards with two touchdowns in that game, and Travis Etienne added 28 yards and a TD on 18 carries. Cornell Powell had six catches for 161 yards and a score to lead the Clemson receivers there.

PICK: I’m going with Pittsburgh. It’s been tough picking Clemson games with any confidence over the last couple of weeks, what with all the postponements, virus inactive lists, etch. That said, if Clemson is going to cover it’s going to be up to the defensive side of the ball in this one. The Tigers have given up at least 21 points in each of the last three outings, and a combined 75 in the last two games. The Panthers offense (though not against elite competition) has shined over the last two games, with a combined 89 points in that time. I think Pittsburgh has the offensive gas to get in there.