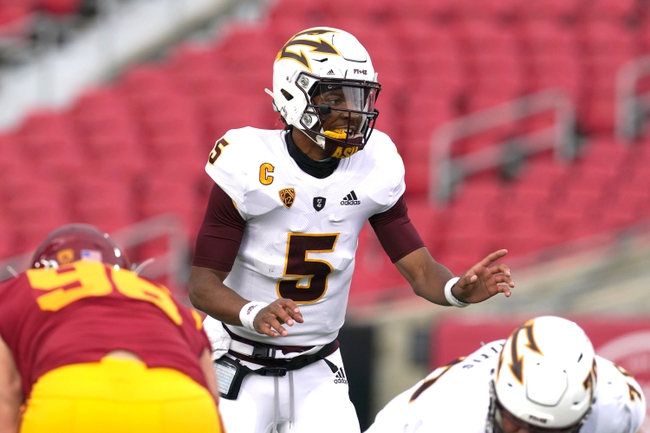 Utah has just one game under their belt in the 2020 college football season, and they’re 0-1 so far. The Utes fell to USC 33-17 this past weekend. As for Arizona State, they’ve played just one game—a loss—as well this season. The Sun Devils fell in a tough one to USC on November 7. Check back all season long for free college football picks at Sports Chat Place.

Utah had to wait quite a while to finally play their first game of the 2020 season, going through virus outbreaks, cancelled openers, four different schedules and four different season-opening opponents. The result was a 33-17 loss to USC, featuring five Utah turnovers (two inside their own 25) and 357 yards of total offense allowed. The Utes were down 24-17 at halftime and didn’t score the rest of the way.

In the opener loss, Utah quarterback Jake Bentley posted 171 yards, one TD and two interceptions on 16-of-28 passing. Jordan Wilmore managed 10 carries for 38 yards to lead the rush, and Bryan Thompson had two catches for 48 yards.

Over on the Arizona State side, they’ve suffered through the same virus outbreaks, cancellations and postponements themselves, and haven’t played since way back on November 7. The Sun Devils were supposed to play Colorado this past weekend, but that one was cancelled due to Arizona not having enough active scholarship players available.

In the Sun Devils’ tough 28-27 loss to USC back on the 7th, Arizona State quarterback Jayden Daniels posted 134 yards with one TD, and also led the rush on 11 carries and 111 yards. Deamonte Trayanum added 84  yards with two touchdowns on 12 carries, and Rachaad White had three catches for 70 yards and a TD.

PICK: I’m going with Arizona State here. Provided everything falls into place and we’ve got a good on-field representation of both teams, we can get a feel for both by their common opponent in USC. The Sun Devils kept pace with the Trojans nicely, mostly due to their 258 rush yards and 6.4 yards-per-play average. The Utes did better offensively in their USC game with 335 total yards, but the five turnovers were killer. This should be a pretty interesting matchup but I think Arizona State can eke it out.