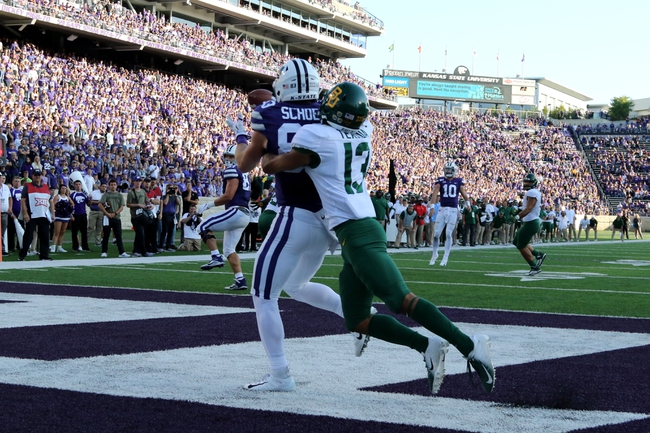 The Baylor Bears host the Kansas State Wildcats when they meet in Big 12 conference college football action from McLane Stadium in Waco on Saturday night.

The Baylor Bears will be out to snap a five-game losing streak after a 24-23 loss to Texas Tech last time out, falling to 1-5 on the year as a result. Charlie Brewer has thrown for 1,278 yards, 11 touchdowns and 6 interceptions on 62% passing while Craig Williams leads the Bears in rushing with 197 rushing yards and a pair of TDs. John Lovett, Brewer and Qualan Jones each have 100+ rushing yards as well this season while R.J. Sneed leads the Bears in receiving with 349 receiving yards on 27 grabs with a pair of touchdowns this season. Trestan Ebner has 224 receiving yards with a pair of touchdowns while Gavin Holmes, Josh Fleeks and Ben Sims each have 100+ receiving yards with Sims logging 3 touchdowns this season. On defense, Terrel Bernard leads the Bears with 55 total tackles including 34 solo tackles and 3.5 sacks but is expected to be out for the rest of the season due to injury. William Bradley-King has 3.5 sacks as well while Jalen Pitre and JT Woods each have a pair of interceptions.

This is a hard game to call as you have a struggling Kansas State team giving up points to a bad Baylor team but Baylor’s at home. With that said, I feel the better play here is on the total and I’ll side with the under. Offense has been hard to come by for both of these teams, for Baylor it’s been much of the season that’s been the issue and for Kansas State it’s been more recent, but this is a game I could see finishing 24-17 or something in that area so I’ll take the under here.