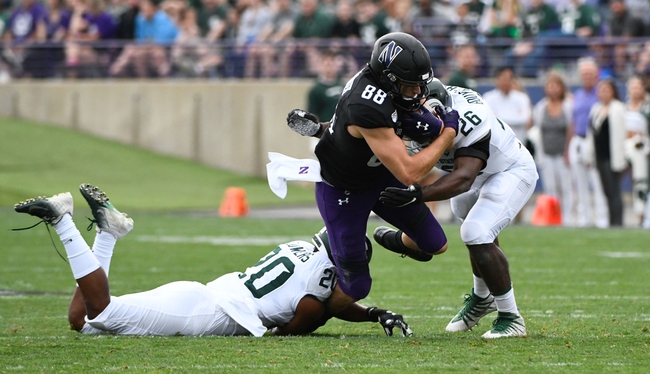 The Michigan State Spartans host the undefeated Northwestern Wildcats when they square off in Week 13 Big Ten conference college football action from Spartan Stadium in East Lansing on Saturday afternoon.

The Northwestern Wildcats will look to add to their current 5-0 record after picking up a huge 17-7 win over Wisconsin last time out. Peyton Ramsey has thrown for 926 yards, 8 touchdowns and 4 interceptions on 61.9% passing while Drake Anderson has rushed for a team-high 211 yards and 2 touchdowns. Isaiah Bowser has added 184 rushing yards for the Wildcats while Ramaud Chiaokhiao-Bowman has a team-high 22 catches for 290 yards and 4 touchdowns. Kyric McGowan has 22 catches for 213 yards while John Raine has 14 grabs for 122 yards this season. On defense, Blake Gallagher leads Northwestern with 48 total tackles while Paddy Fisher has 46 total tackles with a team-high 28 solo tackles. Brandon Joseph leads Northwestern with 5 interceptions on the year while Eku Leota has a team-high 4 sacks.

The Michigan State Spartans will look to bounce back after back-to-back losses including a 24-0 loss to Indiana last time out. Rocky Lombardi has thrown for 890 yards, 6 touchdowns and 7 INTs on 57.1% passing while Jordon Simmons leads the Spartans in rushing with 147 yards and Jalen Nailor has a team-high 280 receiving yards this season. Ricky White has 223 receiving yards and Jayden Reed has a team-high 20 catches for 216 yards and 2 touchdowns this year. On the defensive side, Antjuan Simmons has a team-high 40 total tackles including 17 solo tackles while Noah Harvey and Tre Person each have 17 solo tackles as well and Shakur Brown has a team-high 3 INTs this season for Sparty.

This is a lot of points to be laying with most teams on the road, but the Spartans’ offense has been anemic to put it politely in their last couple of games, being outscored 73-7 in their last two games, and I’m willing to argue that Northwestern is better than Indiana and Iowa defensively. Northwestern’s also been strong against the spread so far this season as well as in this particular matchup, and I could easily see a 24-7 win for Northwestern or something along those lines, so I’ll lay the points with the Wildcats on the road here.