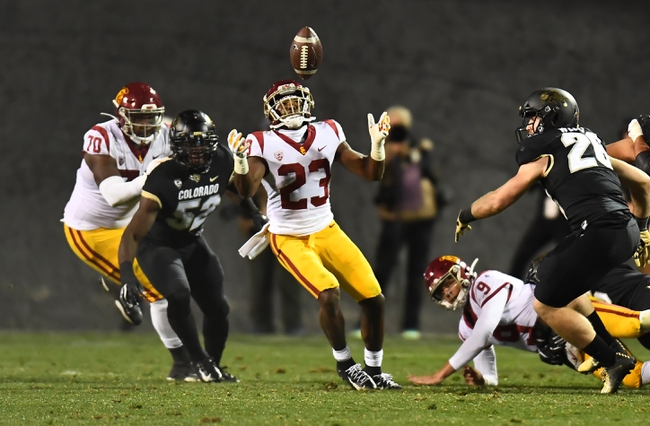 This Game Has Been Cancelled

The Colorado Buffaloes and the USC Trojans meet in Pac-12 college football action from the Los Angeles Memorial Coliseum on Saturday afternoon.

The Colorado Buffaloes will look to add to their 2-0 mark on the year after a 35-32 win over Stanford last time out. Sam Noyer has thrown for 512 yards, 3 touchdowns and an interception on 63.6% passing while Jarek Broussard has a team-high 308 rushing yards with 3 TDs and the aforementioned Noyer also has 100 rushing yards with 3 TDs on the ground of his own. Dimitri Stanley leads Colorado’s receiving group with 12 receptions for 192 yards and a touchdown this season. On defense, Nate Landman leads Colorado with 20 total tackles including a team-high 13 solo tackles while Carson Wells has a sack and an interception and Mustafa Johnson has a sack as well this season.

The USC Trojans will look to build on their 3-0 start after a 33-17 win over Utah in their last game. Kedon Slovis has thrown for 970 yards, 5 touchdowns and 2 interceptions on 70.7% passing while Markese Stepp has 135 rushing yards and 2 TDs. Vavae Malepeai has 130 rushing yards with a pair of scores and Stephen Carr has 122 rushing yards and 2 TDs on the ground as well this year. Amon-Ra St. Brown leads USC with 19 catches for 266 yards while Drake London has 238 receiving yards and Tyler Vaughns and Bru McCoy each have 100+ receiving yards as well this season. On defense, Talanoa Hufanga has a team-high 24 total tackles including 14 solo tackles and a pair of interceptions while Marlon Tuipulotu and Drake Jackson each have a pair of sacks this season.

USC got their act together against Utah, but it was also against a Utah team that hadn’t played a game up to that point while a lot of the conference, USC included, had already had two games under their belt. Even if we go back to those two games, USC barely got by Arizona State at home and had to scrape by an Arizona team that was projected to finish near or at the bottom of the Pac-12 before the season started. Say what you want about Colorado, but the Buffs are 2-0, have a solid offense and have played in some close games themselves already this season. Sure, USC is the more name recognizable team and may be better side-by-side, but almost two touchdowns better? I’m not so sure right now. I’ll take Colorado and the points in this one.