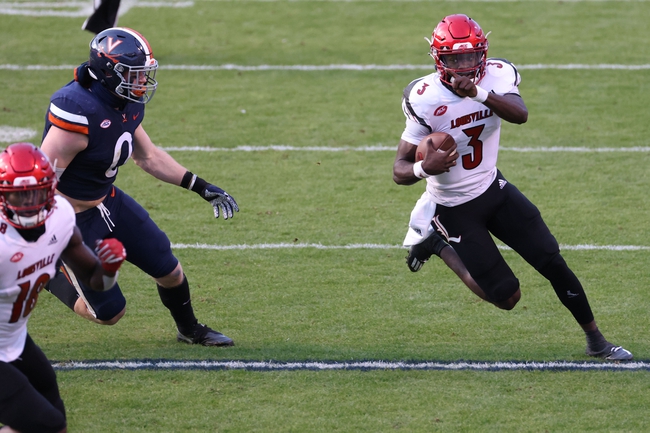 The Boston College Eagles host the Louisville Cardinals when they meet in week 13 ACC college football action from Alumni Stadium in Chestnut Hill on Saturday afternoon.

The Louisville Cardinals will be looking to build on their 3rd win of the season after a 30-0 win over Syracuse last time out. Malik Cunningham has thrown for 2,126 yards, 16 touchdowns and 11 interceptions on 63.7% passing while also rushing for 438 yards and 6 scores. Javian Hawkins has a team-high 822 rushing yards with 7 touchdowns while Dez Fitzpatrick leads Louisville in receiving with 574 yards and Tutu Atwell has a team-high 41 catches for 547 yards and 6 touchdowns. Braden Smith has 22 grabs for 315 yards and Marshon Ford has 21 grabs for 272 yards and 5 TDs this season. On defense, C.J. Avery leads the Cardinals with 61 total tackles including a team-high 38 solo tackles while Monty Montgomery has a team-high 4 sacks. Yasir Abdullah has 3 sacks while Dorian Etheridge has 2.5 sacks and three other players have two sacks for the Cardinals this season.

The Boston College Eagles will look to rebound from a 45-31 loss to Notre Dame in their last game to fall to 5-4 on the year. Phil Jurkovec has thrown for 2,355 yards, 17 touchdowns and 5 interceptions on 59.9% passing while David Bailey leads the Eagles with 450 rushing yards and 5 touchdowns. Travis Levy has rushed for 267 yards while Jurkovec has 130 yards and 3 touchdowns on the ground. Zay Flowers leads BC with 625 receiving yards and 7 touchdowns while Hunter Long has a team-high 47 grabs for 560 yards and 4 scores. CJ Lewis and Jaelan Gill each have 350+ receiving yards with Lewis adding 382 yards and 4 TDs while Levy and Jehlani Galloway each have 100+ receiving yards this season. On defense, Isaiah McDuffie leads the Eagles with 87 total tackles including a team-high 49 solo tackles along with 3 sacks while Max Richardson has 85 total tackles with 45 solo tackles and 3.5 sacks. Maximilian Roberts has a team-high 4.5 sacks this season as well for Boston College.

I'm a bit worried that this line is so close to a pick 'em, but Boston College's QB Phil Jurkovec separated his shoulder last time out and he's questionable, so even if he goes he's probably not 100%. But even then, it speaks volumes that the Cardinals are still a dog with that being a possibility. Javian Hawkins is now sitting out the rest of the season to focus on the NFL draft so that's one less weapon for Louisville and while the Cardinals looked good last time out, it was against Syracuse and sorry Cardinal fans, you can't play Syracise every week. I think Boston College runs all over a Louisville team that has issues making tackles, so give me the Eagles and lay the point in this spot.