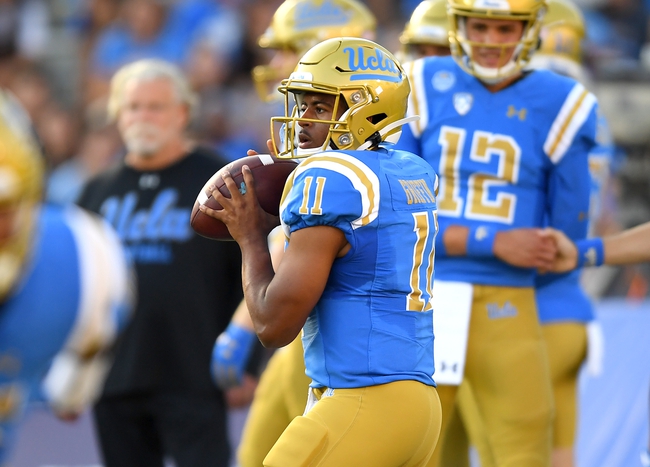 The UCLA Bruins host the Arizona Wildcats as they battle Saturday in week 13 Pac-12 college football action from the Rose Bowl in Pasadena.

Arizona comes in here at 0-2 so far. The Wildcats fell to USC in the opener, then fell again to Washington this past weekend. As for UCLA, they’re 1-2 on the 2020 college football season. The Bruins have a win over California alongside losses to Colorado and Oregon. Check back all season long for free college football picks at Sports Chat place.

Arizona put up a pretty good effort in their opener loss to USC, falling behind late in a 34-30 defeat. Wildcats quarterback Grant Gunnell put up 286 yards with three touchdowns and an interception on 24-of-36 passing in that one, and Gary Brightwell added 112 rush yards on 21 carries. Tayvian Cunningham managed 110 yards and a TD on five receptions there as well.

In the Washington game Arizona fell behind early and couldn’t catch up despite 27 fourth-quarter points in a 44-27 loss. Gunnell had 259 yards and three TDs in that one, and Stanley Berryhill had five catches for 65 yards and two scores. Brightwell was the lead rusher again on 55 yards from 11 carries.

Over on the UCLA side, it’s been one huge win and a pair of close, tough losses. The Bruins opened up with a loss to Colorado 48-42, but then pummeled California 34-10 in the next game. This past weekend, UCLA lost another tough one 38-35 to Oregon.

In the loss to the Ducks, UCLA quarterback Chase Griffin managed 195 yards and a TD with two interceptions, and Kyle Philips had 91 yards on eight catches. Demetric Felton led the rush there with 167 yards and two scores off 34 carries.

Meanwhile, UCLA is 4-1-2 ATS in their last seven after an ATS win and 1-5 ATS versus a team with a losing record. The under is 5-2 in the Bruins’ last seven home games and the over is 9-4-1 in their last 14 conference games.

PICK: I’m sticking with UCLA. Granted it’s a small sample size against good teams, but Arizona has given up a combined 78 points in their first two outings. UCLA gave up 86 combined in their losses to Colorado and Oregon, so this upcoming matchup could very well end up a high-scoring affair. That said I think UCLA is a little more consistent so far, and I like the Bruins to power out a late cover.