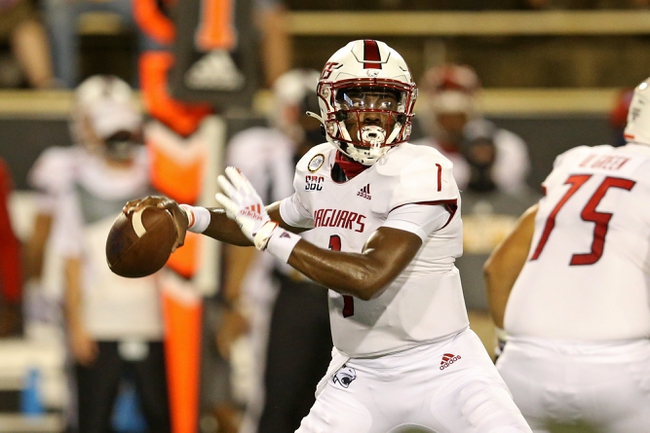 South Alabama enters this one at 3-6 so far. The Jaguars have lost four games in a row to Georgia Southern, Coastal Carolina, Louisiana and Georgia State. As for Arkansas State, they’re 3-6 this year as well. The Red Wolves have also lost four straight to App State, Troy, Louisiana and Texas State. Check back all season long for free college football picks at Sports Chat Place.

South Alabama opened the year at 3-2 with three convincing wins over Southern Miss, Texas State and LA-Monroe. Since then it’s been a downward slide and not much production. The Jaguars have lost to Georgia Southern 24-17, Coastal Carolina 23-6, Louisiana 38-10 and Georgia State 31-14 in their losing skid.

In the loss to Georgia State, South Alabama quarterback Desmond Trotter put up 211yards on 25-of-43 passing, and Jalen Tolbert led the receivers with five catches for 75 yards. Jared Wilson topped the Jaguars rushers there with 49 yards and a score on seven carries.

Over on the Arkansas State side, they’ve experienced a lot of the same issues. The Wolves opened at 3-2 as well with wins over Kansas State, Central Arkansas and Georgia State. Since then Arkansas State has dropped to App State 45-17, Troy 38-10, Louisiana 27-20 and Texas State 47-45.

In the loss to the Bobcats, Arkansas State QBs Logan Bonner and Layne Hatcher combined for 462 passing yards and four touchdowns, while Jamal Jones led the rush on 106 yards and a score from 16 carries. Jeff Foreman and Jonathan Adams combined for 13 catches, 189 yards and three touchdowns as well.

PICK: I’m going with Arkansas State here. South Alabama has been pretty underwhelming on offense during this losing streak, putting up a combined 47 points across four games. Each of the Jaguars’ last three losses has come by 17 points or more, so they haven’t been getting close lately. The Red Wolves have managed to stay competitive, and have lost their last pair by a combined nine points. I like Arkansas State to take control of this one and cover.