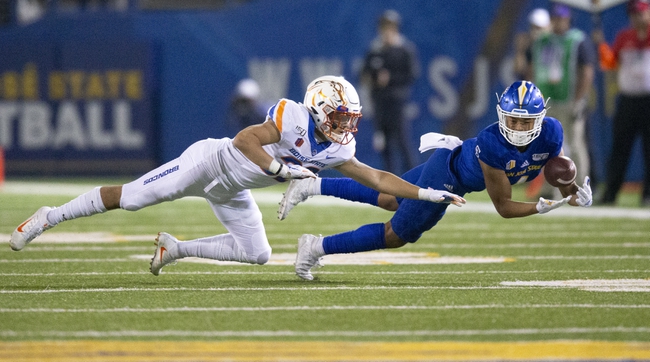 The San Jose State Spartans come into this game looking to remain unbeaten and also rested after their last game against Fresno State was cancelled due to COVID-19 protocols. Nick Starkel has thrown for 980 yards, 9 touchdowns and 2 interceptions on 70.1% passing while Nick Nash leads the Spartans in rushing with 177 rushing yards and Tyler Nevens and Kairee Robinson each have 100+ rushing yards this season. Bailey Gaither leads San Jose State’s receiving group with 27 grabs for 432 yards and 4 touchdowns while Tre Walker has 265 receiving yards and Derrick Deese Jr. and Isaiah Hamilton each have 100+ receiving yards with Deese Jr. recording 3 touchdown receptions this season. On defense, Kyle Harmon leads San Jose State with 52 total tackles including a team-high 31 solo tackles while Cade Hall has a team-high 5.5 sacks. Viliami Fehoko has 4 sacks while Tre Jenkins has a pair of interceptions for the Spartans this season.

I get Boise State being favored at home as the Broncos just look like a different team on that blue turf and this is just a tough test for San Jose State. However, San Jose State’s been one of the pleasant surprises in the Mountain West this season and have already passed a huge test with a road win over a San Diego State team that’s very good defensively. I know there’s a week between games, but Boise State had to make the long trek back from Hawaii and travel like that messes up your body and it takes a while to reacclimate yourself back to normal surroundings and get rid of jet lag. Maybe I’m pulling at straws but it’s just a roundabout way of saying I like San Jose State with the points in this one.