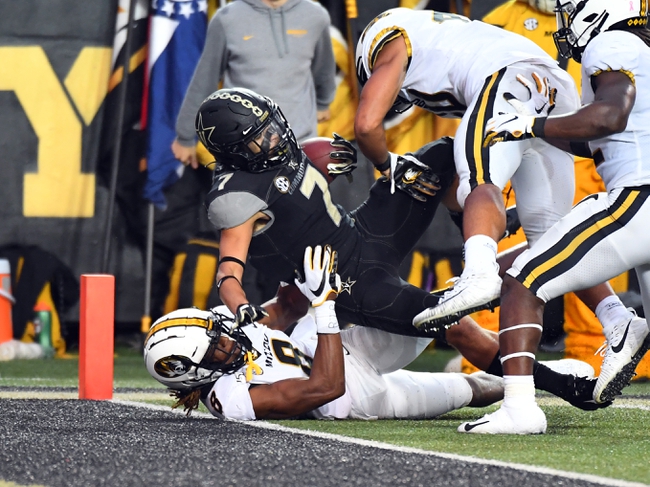 The Missouri Tigers take on the Vanderbilt Commodores as they meet in SEC college football action from Memorial Stadium at Faurot Field on Saturday afternoon in a game added to the schedule.

The Vanderbilt Commodores will still be hunting for their first win of the year after falling to 0-7 after a 38-17 loss to Florida last time out. Ken Sears has thrown for 1,610 yards, 10 touchdowns and 9 interceptions on 66.5% passing while Keyon Henry-Brooks leads the Commodores in rushing with 374 rushing yards. Ja’Veon Marlow and Jamauri Wakefield each have 100+ rushing yards as well for Vandy this season. Cam Johnson leads Vanderbilt’s receiving group with 44 grabs for 448 yards and a pair of touchdowns while Amir Abdur-Rahman and Chris Pierce Jr. each have 300+ receiving yards with Pierce Jr. hauling in a team-high 5 TDs. Ben Bresnahan and the aforementioned Henry-Brooks each have 200+ receiving yards with Bresnahan posting 262 receiving yards and 3 touchdowns this season. On defense, Anfernee Orji leads the Commodores with 47 total tackles while Jaylen Mahoney has a team-high 23 total tackles as part of his 45 total tackles this season. Allan George also has 23 solo tackles and Dayo Odeyingbo has a team-high 3.5 sacks. Andre Mintze has 3 sacks for Vanderbilt as well this season.

The Missouri Tigers will look to build off of a 17-10 win over South Carolina to improve to 3-3 on the year. Connor Bazelak has thrown for 1,304 yards, 5 touchdowns and 2 interceptions on 68% passing while Larry Rountree III has a team-high 400 rushing yards with 5 rushing TDs. Tyler Badie has 142 rushing yards as well as 200 receiving yards and 2 receiving touchdowns, placing him 2nd on the team in that regard. Jalen Knox has a team-high 25 catches for 248 yards while Keke Chism, Damon Hazelton, Tauskie Dove and Barrett Banister all have 100+ receiving yards this season for Mizzou. On defense, Nick Bolton leads Missouri with 67 total tackles including a team-high 36 solo tackles and 3 sacks.

Something has to give here with Missouri 3-0 ATS at home and Vandy 3-0 ATS on the road. With that said, both teams have lived up to their billings in that aspect, with Missouri posting wins over LSU and Kentucky as well as a cover at home against Alabama while Vanderbilt hasn’t lost by more than 7 points on the road this season and have been double-digit underdogs in all of those spots. This is a game I think Missouri wins and probably wins by two touchdowns, but Missouri sneaks in the back door and covers. This is just a tad too many points. Give me Vanderbilt and the points in this one.