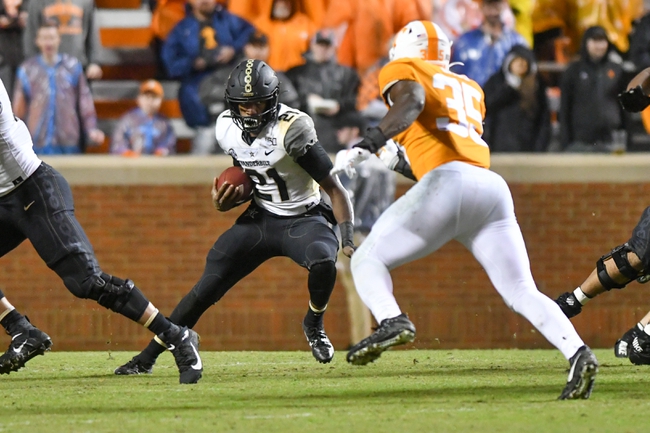 The Tennessee Volunteers and the Vanderbilt Commodores meet in SEC college football action from Vanderbilt Stadium on Saturday night.

The Tennessee Volunteers will be out to snap a five-game losing skid after a 30-17 loss to Auburn last time out. Jarrett Guarantano has thrown for 1,112 yards, 6 touchdowns and 4 interceptions on 62% passing while Eric Gray leads the Vols in rushing with 651 rushing yards and 4 TDs and Ty Chandler has 315 rushing yards and a pair of scores this season. Josh Palmer leads Tennessee’s receiving group with 22 catches for 331 yards and 4 touchdowns while Gray, Brandon Johnson and Jalin Hyatt all have 150+ receiving yards this season. On the defensive side, Trevon Flowers leads Tennessee with 45 total tackles including a team-high 26 solo tackles while Deandre Johnson and Kivon Bennett each have a team-high 4.5 sacks this year.

The Vanderbilt Commodores will still be hunting for their first win of the year after falling to 0-7 after a 38-17 loss to Florida last time out. Ken Sears has thrown for 1,610 yards, 10 touchdowns and 9 interceptions on 66.5% passing while Keyon Henry-Brooks leads the Commodores in rushing with 374 rushing yards. Ja’Veon Marlow and Jamauri Wakefield each have 100+ rushing yards as well for Vandy this season. Cam Johnson leads Vanderbilt’s receiving group with 44 grabs for 448 yards and a pair of touchdowns while Amir Abdur-Rahman and Chris Pierce Jr. each have 300+ receiving yards with Pierce Jr. hauling in a team-high 5 TDs. Ben Bresnahan and the aforementioned Henry-Brooks each have 200+ receiving yards with Bresnahan posting 262 receiving yards and 3 touchdowns this season. On defense, Anfernee Orji leads the Commodores with 47 total tackles while Jaylen Mahoney has a team-high 23 total tackles as part of his 45 total tackles this season. Allan George also has 23 solo tackles and Dayo Odeyingbo has a team-high 3.5 sacks. Andre Mintze has 3 sacks for Vanderbilt as well this season.

Am I late to the party or something? Like is there something I’m not seeing? I just have no idea why Tennessee is laying double-digits on the road to anybody. Sure, Vanderbilt’s winless and has had their fair share of struggles this season, but Tennessee’s been no prize pig themselves and Vanderbilt hung around with Kentucky and Mississippi State before getting pushed around by Florida last week, but in a game they covered in by two touchdowns. The Vols have also had issues against the number when it comes to this matchup for a couple of years now and I see it being no different here. Give me Vanderbilt and the points in a game Vanderbilt could win outright.