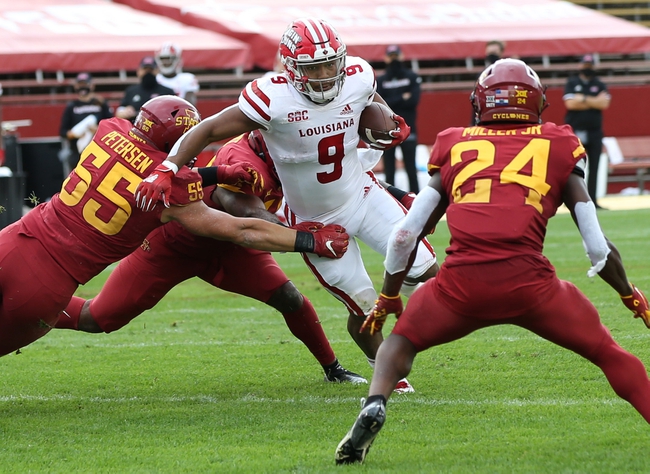 The Appalachian State Mountaineers host the Louisiana Ragin’ Cajuns when they  meet in a Sun Belt conference rematch of the conference title game last season in college football action at Kidd-Brewer Stadium on Friday night.

The Louisiana Ragin’ Cajuns will look to finish the season strong and head to the Sun Belt championship game with some momentum after improving to 8-1 on the year with a 70-20 romp over Louisiana-Monroe in their last game. Levi Lewis has thrown for 2,027 yards, 16 touchdowns and 7 interceptions on 62.3% passing while Elijah Mitchell and Trey Ragas have combined for 1,273 rushing yards in the ULL backfield with each back putting up 7 rushing TDs this season. Peter LeBlanc leads the Ragin’ Cajuns in receiving with 23 grabs for 334 yards while Kyren Lacy and Jalen Williams each have 300+ receiving yards and 3 touchdowns apiece this season. The Ragin’ Cajuns have another five different receivers with at least 100 receiving yards as well on the year. On defense, Lorenzo McCaskill leads Louisiana with 66 total tackles including a team-high 35 solo tackles while Ferrod Gardner has 35 solo tackles as well as 3 sacks. Bralen Trahan has a team-high 4 interceptions while Eric Garror has 3 picks and Zi’Yon Hill has 3 sacks as well this season for the Ragin’ Cajuns.

The Appalachian State Mountaineers will try to hold things down at home after picking up a 47-10 win over Troy to improve to 7-2 on the year and 5-1 in Sun Belt conference play. Zac Thomas has thrown for 1,775 yards, 17 touchdowns and 8 interceptions while Camerun People has a team-high 639 rushing yards with 6 touchdowns and Daetrich Harrington has 595 rushing yards with a team-high 7 scores. Marcus Williams Jr. and Nate Noel each have 300+ rushing yards while Malik Williams and Thomas Hennigan each have 450+ receiving yards to lead the Mountaineers receiving group this season. Christian Wells also has 220 receiving yards and a team-high 4 touchdowns. On defense, D’Marco Jackson leads App State with 63 total tackles including a team-high 27 solo tackles while Demetrius Taylor has 6 sacks and Brendan Harrington and Ryan Huff each have 3 interceptions for App State this season.

This is a hard one to call as Louisiana has locked themselves into the Sun Belt title game while App State is pretty much down and out after losing to Coastal and even winning out won’t matter for the Mountaineers as the Chanticleers will own the head-to-head matchup. I just think that Louisiana will want to carry as much momentum as possible into the conference championship game and the best way to do that is to beat App State on their own field. It’ll be a tight game, so give me Louisiana and the free field goal in this one.