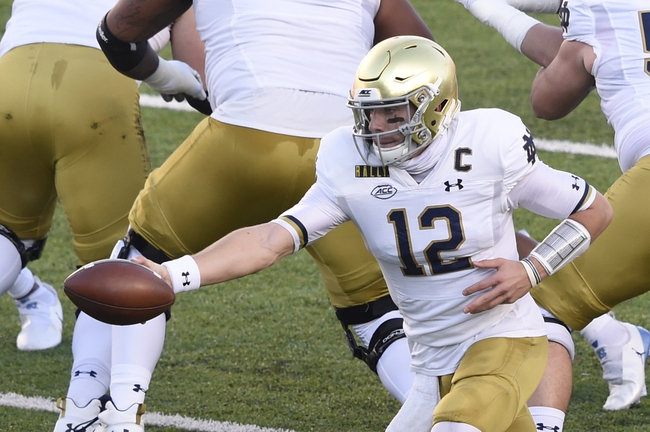 Syracuse comes into this one at 1-9 so far. The Orange are riding a seven-game losing streak, most recently falling to NC State this past weekend. As for Notre Dame, they’re rolling along at 9-0 this season. The Irish have taken out Clemson (OT), Boston College and North Carolina in their last three games. Check back all season long for free college football picks at Sports Chat Place.

In the loss to the Wolfpack, Syracuse quarterback Rex Culpepper posted 254 yards with two touchdowns, and Taj Harris led the receivers on 13 catches for 146 yards and a score. Sean Tucker led the near-nonexistent rush with 18 yards on 16 carries.

Over on the Notre Dame side, it’s been victory after victory this season, but the Irish have cut it very close in a few games. There was the 12-7 scare over Louisville, the 47-40 overtime win over Clemson, and a closer-than-it-should-have-been opener win versus Duke 27-13. Notre Dame posted a nice win 31-17 over North Carolina their last time out, thanks to a good defensive second half that held the Tar Heels scoreless.

In the win over North Carolina, Irish quarterback Ian Book put up 279 yards with a TD, and Kyren Williams rushed for 124 yards and two scores off 23 carries. Javon McKinley led the receivers on 135 yards from six catches.

PICK: I’m still leaning Notre Dame here, but the line will probably be uncomfortably thick in most places. Syracuse just hasn’t been a consistently good scoring team at all this season, and that issue will be magnified if the Irish can get their running game going and control the time of possession. The Orange likely won’t have a lot of opportunities to get into the end zone, and they’ll have to make the most of every offensive series. That’s a lot to ask in this matchup, so I think the Irish can cover.