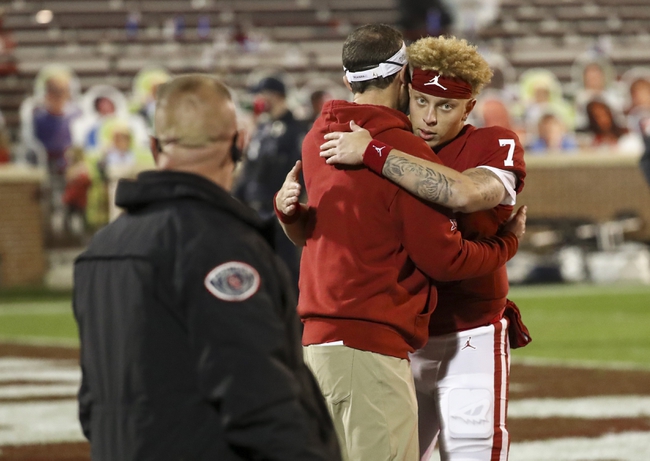 The Oklahoma Sooners take on the Baylor Bears Saturday in week 14 Big 12 college football action at Memorial Stadium in Norman.

The Baylor Bears look for back-to-back wins to rebound from a 2-5 record. The Baylor Bears have split their last eight road games. Charlie Brewer is completing 64.9 percent of his passes for 1,627 yards, 13 touchdowns and six interceptions. Brewer has five touchdown passes in his last three games. R.J. Sneed and Trestan Ebner have combined for 725 receiving yards and six touchdowns while Gavin Holmes has 25 receptions. The Baylor Bears ground game is averaging 102.5 yards per contest, and Craig Williams leads the way with 197 yards and two touchdowns. Defensively, Baylor is allowing 27.7 points and 367.7 yards per game. Terrel Bernard leads the Baylor Bears with 55 tackles, William Bradley-King has 3.5 sacks and JT Woods has three interceptions.

The Baylor Bears are a hit or miss team that's been on the wrong side of some tough losses, and four of their five losses have been decided by 10 or less points. The Oklahoma Sooners have had an extra week to prepare for this game and they're firing on all cylinders offensively, which includes averaging 55 points in their last three games. Oklahoma should be the big favorite here and has the potential to blow the doors off in this contest, but we know Baylor can score and there's been some interesting matchups between these clubs recently. I'm torn in this spot, but I'd lean toward Baylor and the points, especially with us getting the hook on top of three touchdowns.