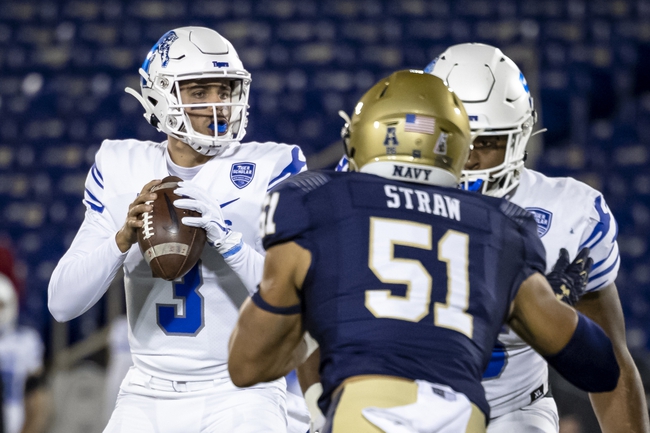 The Tulane Green Wave host the Memphis Tigers when they meet in AAC college football action from Yulman Stadium on Saturday afternoon in AAC Action.

The Memphis Tigers will look to add to their three-game winning streak after a 10-7 win over Navy last time out. Brady White has thrown for 2,602 yards, 24 touchdowns and 6 interceptions on 61% passing while Rodrigues Clark has a team-high 500 rushing yards and Kylan Watkins has 389 rushing yards as well this season. Calvin Austin III leads Memphis in receiving with 48 catches for 841 yards and 8 touchdowns while Sean Dykes has 42 grabs for 521 yards and 6 scores and Tahj Washington has 516 receiving yards and 5 TDs. On defense, Quindell Johnson leads the Tigers with 60 total tackles including 45 solo tackles while Rodney Owens has a team-high 3 interceptions. Morris Joseph leads the Tigers with 5 sacks while O’Bryan Goodson and Wardalis Ducksworth each have 4 sacks and Joseph Dorceus has 3 sacks this season.

The Tulane Green Wave will look to bounce back after falling to 5-5 on the year after a 30-24 loss to Tulsa last time out. Michael Pratt has thrown for 1,384 yards, 16 touchdowns and 5 intefceptions on 54.6% passing while Stephon Huderson has a team-high 654 rushing yards with 4 scores and Cameron Carroll has 583 rushing yards with 10 TDs. Amare Jones also has 371 rushing yards as well this season. Duece Watts leads Tulane in receiving with 27 catches for 466 yards and 5 touchdowns while Jha’Quan Jackson has 299 receiving yards with 5 scores as well. Three other Tulane receivers each have 100+ receiving yards this season as well. On defense, Dorian Williams leads the Green Wave with 74 total tackles including a team-high 46 solo tackles and 4.5 sacks while Patrick Johnson has a team-high 10 sacks and Cameron Sample has 4 sacks. Nick Anderson and Jeffery Johnson each have 3.5 sacks with Anderson posting 73 total tackles while Larry Brooks, Macon Clark and Willie Langham each have a pair of INTs for Tulane this season.

Part of me understands why Tulane is favored but I still don’t agree with it. I mean sure, Tulane’s picked up some wins lately and they’ve stepped it up on defense or so they claim, but the Tigers are still one of the better offensive units in the country, improved defense or not. I think Memphis not only comes out firing but takes down Tulane as well. Give me Memphis on the money line in this game.