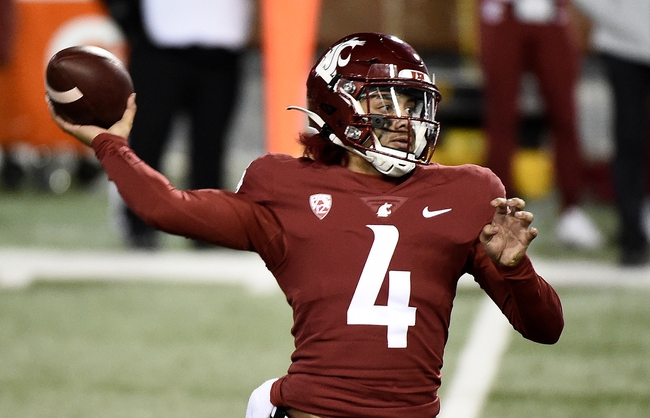 The Washington State Cougars come into this one rested after having their last game with Stanford cancelled due to COVID issues. Jayden de Laura has thrown for 548 yards, 4 touchdowns and an interceptions on 59.7% passing while Deon McIntosh leads the Cougars in rushing with 239 rushing yards and a pair of touchdowns. Renard Bell and Travell Harris each have a team-high 16 catches with Bell logging 218 receiving yards while Harris has 201 yards and a pair of touchdowns. On defense, Daniel Isom and Jahad Woods each have a team-high 16 total tackles and 10 solo tackles while Ron Stone Jr. has 1.5 sacks to lead Wazzu in that department.

The USC Trojans will look to add another notch to their unbeaten start to the year after improving to 3-0 after a 33-17 win over Utah last time out. Kedon Slovis has thrown for 970 yards, 5 touchdowns and 2 interceptions on 70.7% passing while Markese Stepp leads the Trojans in rushing with 135 rushing yards and 2 touchdowns while Vavae Malepeai and Stephen Carr each have 2 touchdowns with 130 and 122 rushing yards respectively this season. Amon-Ra St. Brown leads USC in receiving with 19 grabs for 266 yards while Drake London has 238 receiving yards. Tyler Vaughns and Bru McCoy each have 100+ receiving yards as well this season. On defense, Talanoa Hufanga leads the Trojans with 24 total tackles, including 14 solo tackles with a pair of interceptions while Marlon Tuipulotu and Drake Jackson each have a pair of sacks this year.

I get USC being favored at home after beating up on Utah, but this game was pushed to Sunday because USC was getting through COVID protocols so you have to imagine that there will be some players for USC missing, or not 100% and if they are 100%, there will be little to no practice time involved. Washington State’s had a bye week essentially to prepare for this game and outside of the Utah game, USC’s other two games against Arizona State and Arizona were decided by a combined five points. I think Washington State can do enough to keep this one within the number, so I’ll take a shot with Washington State and the points here.