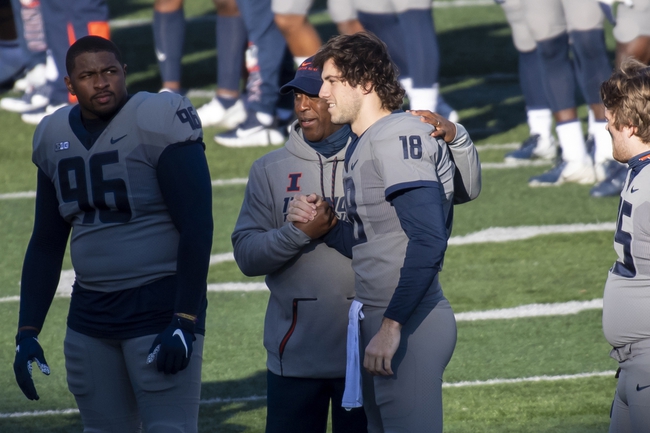 The Northwestern Wildcats face off with their rivals the Illinois Fighting Illini Saturday in week 15 Big Ten college football action from Ryan Field in Evanston.

Illinois enters this one at 2-4 so far. After consecutive wins over Rutgers and Nebraska, the Illini lost their game versus Iowa this past weekend. As for Northwestern, they’re 5-1 so far. After opening with five straight victories, the Wildcats fell by nine to Michigan State last weekend. Check back all season long for free college football picks at Sports Chat Place.

Illinois has had some spotty results and some difficult matchups this season. The Illini opened with three straight losses to Wisconsin, Purdue and Minnesota. Victories over Rutgers 23-20 and Nebraska 41-23 followed, but Illinois was sent back to the loss column 35-21 by Iowa in their last game.

In the loss to the Hawkeyes, Illinois quarterback Brandon Peters put up 116 yards and two touchdowns, while Josh Imatorbhebhe logged 48 yards and a score on four receptions. Chase Brown led the Illini rush with 83 yards on 18 carries.

Over on the Northwestern side, they opened up the season flawlessly with five straight victories. Those wins came over Maryland, Iowa, Nebraska, Purdue and Wisconsin. The Wildcats were stopped in their tracks by Michigan State 29-20 in their last game, however.

In the loss to the Spartans, Northwestern QB Peyton Ramsey logged 210 yards and two interceptions. Drake Anderson led a paltry rush with 41 yards on 10 carries, and Riley Less managed 59 yards from four catches.

PICK: I’m sticking with Northwestern. The Wildcats had a bad outing versus Michigan State, but they were probably due for a dud game. Northwestern’s previous four matchups were each decided by eight points or less, so they’ve been playing it close most of the year. That said, Illinois just doesn’t have the offensive prowess to hang around with the Wildcats if they’re playing well. This should be a pretty thick line most places but I still like Northwestern better on a cover.