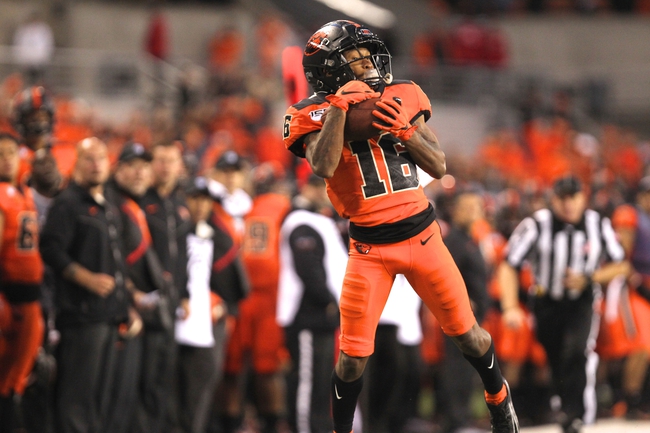 The Oregon State Beavers face off with the Stanford Cardinal in week 15 Pac-12 college football action from Reser Stadium in Corvallis on Saturday.

The Stanford Cardinal will look to get back above .500 after improving to 2-2 on the year with back-to-back wins following a 31-28 win over Washington last time out. Davis Mills has thrown for 754 yards and 3 touchdowns on 63.6% passing while Austin Jones leads the Cardinal in rushing with 332 rushing yards and 7 touchdowns and Nathaniel Peat has 182 rushing yards. Michael Wilson has a team-high 19 catches for 261 yards while Simi Fehoko has 244 receiving yards. Connor Wedington and Brycen Tremaine also have 100+ receiving yards for Stanford’s receiving group this season. On defense, Curtis Robinson and Malik Antoine each have 22 total tackles with Antoine putting up a team-high 16 solo tackles while Thomas Schaffer has 3 sacks this season.

The Oregon State Beavers will look to bounce back after a 30-24 loss to Utah to fall to 2-3 on the year last time out. Tristan Gebbia has thrown for 824 yards, 3 touchdowns and 3 interceptions on 62% passing while Chance Nolan’s thrown for a touchdown, a pick and 202 yards on 52.5% passing. Jermar Jefferson leads the Beavers on the ground with 675 rushing yards and 7 touchdowns while Trevon Bradford leads Oregon State’s receivers with 24 grabs for 239 yards and Kolby Taylor has 221 receiving yards. Luke Musgrave, Teagan Quitoriano and Champ Flemings each have 100+ receiving yards as well for Oregon State this season. On defense, Avery Roberts leads the Beavers with 65 total tackles including 38 solo tackles while Nahshon Wright and Jaydon Grant each have a pair of interceptions this season.

Part of me wants to lay the points with Stanford, but the fact is that Stanford simply can’t cover a spread if their lives depended on it and while Oregon State isn’t as imposing without Tristan Gebbia at QB, Chance Nolan looked alright under center and the Beavers hung around with Utah with the deck stacked against them. I’ll take my chances with Oregon State and the points in this one.