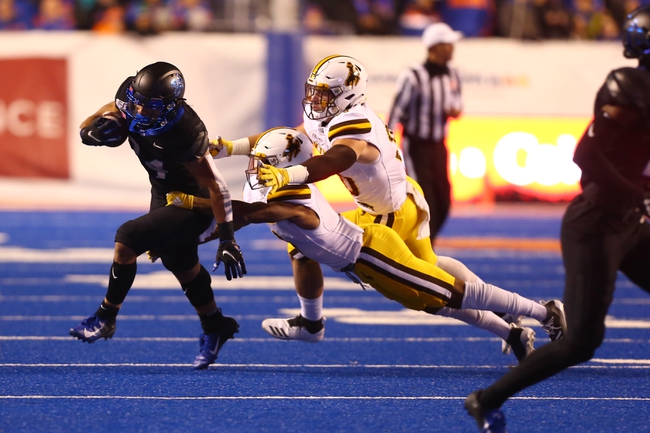 Boise State has really only had one “bad” game this season, and the rest has gone pretty smoothly. The Broncos opened up with wins over Utah State and Air Force, then fell to a tough BYU team 51-17. Since then it’s been two wins for Boise State, 52-21 over Colorado State and 40-32 over Hawaii.

In the win over the Warriors, Boise State quarterback Hank Bachmeier managed 278 yards with one TD and one interception. Andrew Van Buren had a nice day rushing with 113 yards and two scores on 27 carries, and Khalil Shakir added 130 yards with two touchdowns on 11 catches.

Over on the Wyoming side, they’ve been all over the place results-wise this year. After opening with an OT one-point loss to Nevada, Wyoming beat Hawaii 31-7 and Colorado State 34-24. After that it was a 45-14 win over UNLV, then a tough 17-16 loss to New Mexico this past weekend.

In the loss to New Mexico, Wyoming quarterback Levi Williams posted 73 yards with one interception. Isaiah Neyor caught one pass for 54 yards to lead the receivers, and Trey Smith did the rest with 154 rush yards and a TD from 24 carries.

PICK: I’m going to stick with Boise State here. This one could get interesting cover-wise, though. The Cowboys have put up some pretty good points totals this season, and when everything is working Wyoming’s offense is potent. Boise State is a great offensive team as well, with a combined 92 points in their last two games. I like this to be a high-flying affair, with the Broncos eventually banging out a cover.