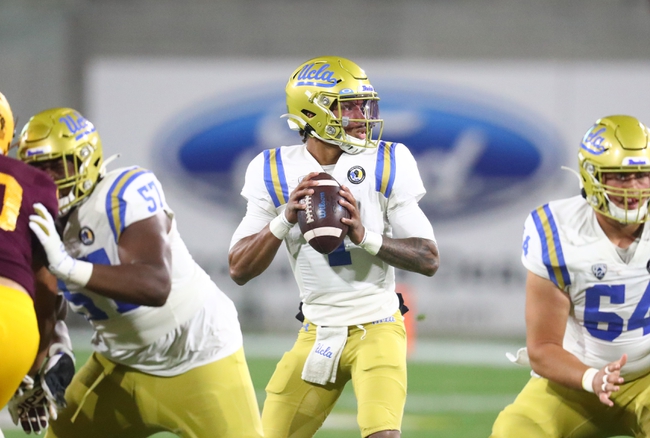 The UCLA Bruins battle their rivals the USC Trojans Saturday in week 15 Pac-12 college football action from the Rose Bowl in Pasadena.

USC enters this one at 4-0 so far. The Trojans have rattled off wins over Arizona State, Arizona, Utah and Washington State in their first four outings. As for UCLA, they’re sitting at 3-2 so far. the Bruins have beaten Arizona and Arizona State in their last two games. Check back all season long for free college football picks at Sports Chat Place.

USC has gotten off to a great undefeated start in their first quartet of outings, but there have been a couple of scares along the way. The Trojans opened with a 28-27 nail-biter over Arizona State, then beat Arizona 34-30 and Utah 33-17. In the Sunday game versus Washington State, USC took a huge victory 38-13.

Over on the UCLA side, they’ve had three solid wins and two heartbreaking losses this season. The defeats came 48-42 to Colorado in the opener and 38-35 to Oregon on November 21. Otherwise it’s been wins 34-10 over Cal, 27-10 over Arizona and 25-18 over Arizona State.

In the win over the Sun Devils last weekend, UCLA quarterback Dorian Thompson-Robinson notched 192 yards with one TD on 18-of-24 passing while also scoring a rush TD. Brittain Brown led the ground attack with 94 yards on seven totes, and Delon Hurt caught four passes for 62 yards and a score.

PICK: I like UCLA in this one. USC had two close escapes right out of the gate, winning both by a combined five points. Conversely, the Bruins have been in every game this year, and were it not for a couple of plays against Colorado (four-point loss) and Oregon (three-point loss), UCLA would be looking at an undefeated record right now. If the Bruins can get out to an early lead and play ball control in this one, I like their chances on banging out a cover.