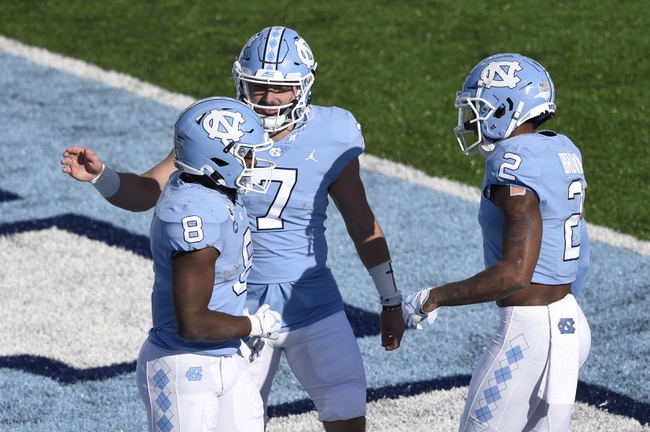 North Carolina enters this one at 7-3 so far. The Tar Heels are 1-1 in their last pair, falling to Notre Dame by 14 then drilling Western Carolina over the weekend. As for Miami, they’re rolling along at 8-1 this year. The Hurricanes have won their last five straight games, most recently shutting out Duke last Saturday. Check back all season long for free college football picks at Sports Chat Place.

North Carolina has had a solid year so far against some tough opponents, with relatively few stumbles. The Tar Heels are 3-1 in their last four games, falling to Notre Dame 31-17 while otherwise taking out Duke 56-24, Wake Forest 59-53 and Western Carolina 49-9.

In the win over the Catamounts, North Carolina quarterback Sam Howell posted 287 yards with two touchdowns, and Michael Carter led the rush with 73 yards and three touchdowns on eight carries. Dazz Newsome was the top receiver in that one with 82 yards and a score off six catches.

Meanwhile, Miami is 7-3 ATS versus a team with a winning record and 2-9 ATS in their last 11 in December. The under is 13-3 in the Hurricanes’ last 16 in December and 4-1 in their last five after a straight-up win.

PICK: I’m leaning toward North Carolina here. This one could realistically go either way though, and it should be a great matchup. Miami had a string of close escapes versus three tough teams lately, winning by no more than five points in that stretch. The Tar Heels have notched 49 or more points in each of their last three wins, and I think North Carolina has the offensive gas to keep up here. This should be a great game, so be sure to tune in.