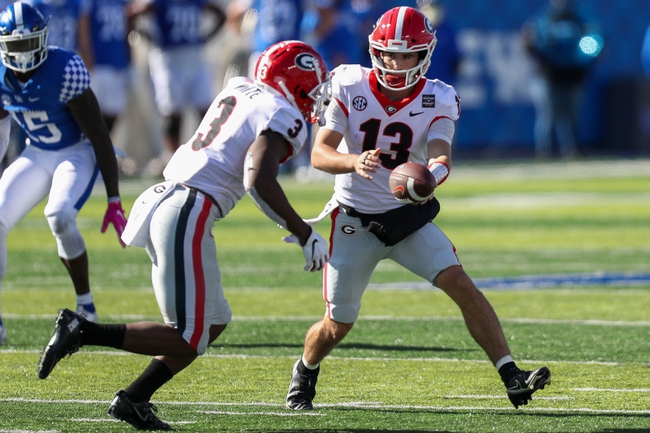 The Missouri Tigers face off with the Georgia Bulldogs in SEC week 15 college football action from Memorial Stadium on Saturday afternoon.

The Georgia Bulldogs come into this one rested after their matchup against Vanderbilt last week was postponed, leaving Georgia at 6-2 coming into this one. Stetson Bennett has thrown for 1,167 yards, 8 touchdowns and 6 interceptions on 55.6% passing while JT Daniels has thrown for 540 yards, 6 touchdowns and a pick on 70.4% passing while Zamir White has a team-high 614 rushing yards and 9 touchdowns and James Cook has 259 rushing yards and a pair of scores. Kendall Milton, Kenny McIntosh and Daijun Edwards each have 100+ rushing yards for Georgia this season. Kearis Jackson leads Georgia’s receiving group with 32 grabs for 455 yards and 3 touchdowns while Jermaine Burton has 360 receiving yards with 3 scores and George Pickens has 252 receiving yards as well as 3 scores of his own this season. On defense, Nakobe Dean leads the Bulldogs with 63 total tackles including 33 solo tackles while Lewis Cine has 33 solo tackles as well and Richard LeCounte and Eric Stokes each have a team-high 3 interceptions. Azeez Ojulari has a team-high 5.5 sacks while Adam Anderson has 4.5 sacks and Jermaine Johnson has 4 sacks for Georgia this season.

The Missouri Tigers will look to build on a 50-48 win over Arkansas in their last game to improve to 5-3 on the year. Connor Bazelak has thrown for 2,002 yards, 5 touchdowns and 2 interceptions on 69.4% passing while Larry Rountree III has 835 rushing yards with 11 touchdowns to lead Mizzou’s rushing attack and Tyler Badie has 239 rushing yards and 4 TDs as well for the Tigers this season. Keke Chism, Damon Hazelton and Tyler Badie each have 300+ receiving yards for Missouri while Jalen Knox, Tauskie Dove and Barrett Banister each have 200+ receiving yards for the Tigers this season. On defense, Missouri is led by Nick Bolton who has a team-high 80 total tackles including 46 solo tackles while Trajan Jeffcoat has a team-high 5 sacks this season.

I get why Georgia’s favored here as they’re the more nameworthy school, but Missouri’s already looked improved under Eli Drinkwitz, and this is a Tigers team that’s really played well at home this season. I just don’t like what I’m seeing from JT Daniels at QB for Georgia and the Tigers have a top-25 run defense to combat what Georgia’s bringing to the table. I’ll take a stab at Missouri and the points in this one.