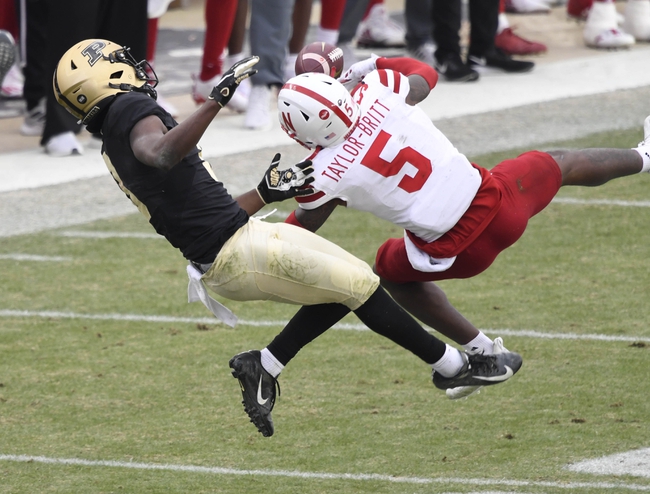 The Purdue Boilermakers and the Indiana Hoosiers meet in a Big Ten conference college football matchup from Memorial Stadium on Friday night.

The Purdue Boilermakers will look to finish strong after coming into this game with an overall record of 2-4. Jack Plummer has thrown for 938 yards, 8 touchdowns and 2 interceptions on 71% passing while Aidan O’Connell has 916 yards, 7 touchdowns and 2 interceptions on 64.7% passing. Zander Horvath leads Purdue’s rushing attack with 442 rushing yards and 2 touchdowns while David Bell has a team-high 53 catches for 525 yards and 5 touchdowns. Milton Wright and the aforementioned Horvath each have 300+ receiving yards as well for the Boilers this season. On defense, Derrick Barnes has a team-high 54 total tackles including 40 solo tackles while Cam Allen has a pair of interceptions and George Karlaftis has a team-leading two sacks this season for Purdue.

The Indiana Hoosiers will look to complete one of the best seasons in recent memory after logging back-to-back winning seasons for the first time in 26 years with a 6-1 record coming into this game. Jack Tuttle has thrown for 161 yards and 2 touchdowns on 66.7% passing in relief of Michael Penix Jr. who went down due to injury a couple of weeks ago and will miss the rest of the season. Stevie Scott III leads the Hoosiers in rushing with 462 rushing yards and 8 touchdowns while Ty Fryfogle has 687 receiving yards to leads Indiana along with 7 touchdowns while Whop Philyor has 414 yards with 3 TDs and Miles Marshall has 257 receiving yards this season. Peyton Hendershot has 151 receiving yards and David Ellis has 118 receiving yards as well for Indiana this season with Hendershot logging 4 receiving touchdowns as well. On defense, Micah McFadden leads the Hoosiers with 52 total tackles including a team-high 39 solo tackles as well as 5 sacks while Jamar Johnson has a team-high 4 interceptions and Jaylin Williams has 3 sacks this yaer. Jerome Johnson has 4 sacks for the Hoosiers and Tiawan Mullen also has 3.5 sacks for Indiana on the year.

You have to think that both of these teas will be up for this game to no end as this is the rivalry game that means the most to both programs and it looked as if we were losing it up until a few days ago. However, it’s going and as such I’m rolling with Indiana here. I expect a hrd-fought game, but bringing in Tuttle just to be a game manager has worked with Penix Jr. going down and Purdue, well, they just can’t stop getting in their own way and in a rivalry game as much as I’d like to think the Boilers step up here, I just think Indiana doesn’t let them. Simple as that. I’ll lay the points with Indiana at home in this one.