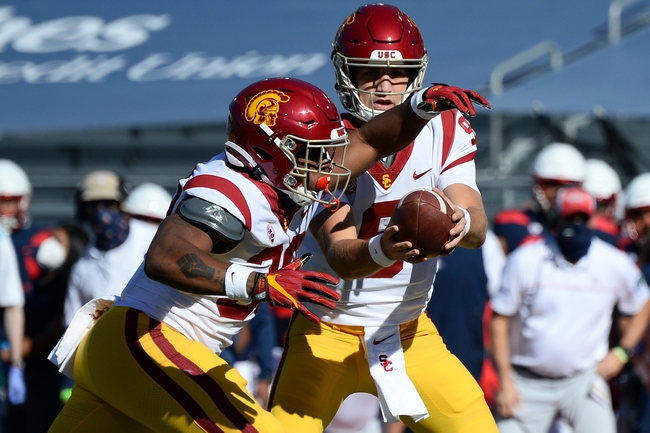 The USC Trojans face off with the Oregon Ducks meet Friday in the Pac-12 Championship Game college football action from LA Memorial Coliseum in Los Angeles.

Oregon enters this Pac-12 Championship Game at 3-2 on the year. The Ducks won their first three games, but have since fallen to Oregon State and California. As for USC, they’re 5-0 this season. The Trojans have taken out Utah, Washington State and UCLA in the last three games. Check back all season long for free college football picks at Sports Chat Place.

This past weekend, Oregon didn’t know they’d be playing in this game. The Washington Huskies were originally slated to match up against the Trojans, but with Washington’s virus issues not improving they had to pull out. The Ducks are trying to repeat as conference champions, so it’s something of an unexpected surprise for Oregon.

In any case, the Ducks came out of the gate this year with wins 35-14 over Stanford, 43-29 over Washington State and 38-35 over UCLA. The last two games have been tight losses for Oregon, however. Those defeats came 41-38 to Oregon State and 21-17 against California.

Over on the USC side, it’s been smooth sailing in the win column, with a couple of close escapes mixed in this season. The Trojans opened with a 28-27 win over Arizona State, then beat Arizona 34-30, Utah 33-17 and Washington State 38-13. Last Saturday USC won again, this time 43-38 over UCLA.

In the win over the Bruins, USC quarterback Kedon Slovis posted 344 yards with five touchdowns and two interceptions. Tyler Vaughns led the receivers on 128 yards and one TD from eight catches, and Vavae Malepeai topped the rush with 110 yards and a score off 19 carries.

PICK: I’m sticking with USC. The Trojans caused a little concern in their last game, coughing up 549 total yards to UCLA. USC was able to overcome the defensive gaffes however, causing three turnovers and winning the time of possession battle. As for Oregon, they stalled out on offense against Cal, scoring exactly zero second-half points. I expect the Ducks to be better scoring-wise here, and this should be a high-flying game with lots of end-zone trips on both sides. I like USC’s offense to bag a couple of late scores and bang out a cover here. Should be a fun game to watch.