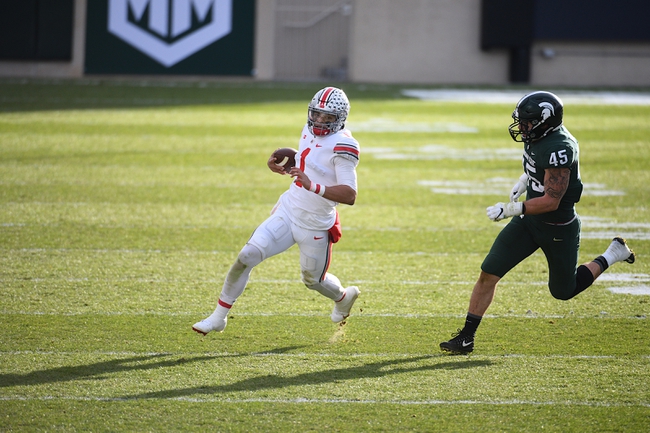 The Ohio State Buckeyes face off with the Northwestern Wildcats in the Big Ten college football championship game on Saturday afternoon at Lucas Oil Stadium in Indianapolis.

The Northwestern Wildcats punched their spot in the conference title game for the 2nd time in three years after finishing with an overall record of 9-1 on the year. Peyton Ramsey threw for 1,218 yards, 9 touchdowns and 6 interceptions on 59% passing while Drake Anderson led the Wildcats in rushing with 256 rushing yards and a pair of touchdowns. Isaiah Bowser and Evan Hull each had 200+ rushing yards while Cam Porter had 174 rushing yards and 3 TDs. Ramaud Chiaokhiao-Bowman had 30 catches for 344 yards and 4 touchdowns while Kyric McGowan’s 30 grabs went for 333 receiving yards. Riley Lees and John Raine each had 100+ receiving yards for the Wildcats as well this season. Defensively ,Paddy Fisher and Blake Gallagher led the Wildcats with 65 total tackles with Fisher logging a team-high 37 solo tackles while Brandon Joseph had a team-high 5 interceptions while Eku Leota had a team-high 4 sacks.

The Ohio State Buckeyes punched their spot to the title game in controversial fashion, getting there with a 5-0 record after multiple postponements due to COVID. Justin Fields threw for 1,407 yards, 15 touchdowns and 3 interceptions on 78.1% passing while Master Teague III led the Buckeyes in rushing with 426 rushing yards and 6 touchdowns. Trey Sermon had 344 rushing yards while the aforementioned Fields ran for 239 yards and 5 touchdowns as well this season. Garrett Wilson led Ohio State with 34 grabs for 572 yards with 5 touchdowns and Chris Olave had 36 grabs for 528 yards and 5 scores as well. On defense, Peter Warrior has logged a team-high 32 total tackles while Baron Browning has a team-high 15 solo tackles and Tommy Togiai has 3 sacks for the Buckeyes. Shaun Wade also has a pair of INTs for Ohio State this season.

This is a hard one to call, as Northwestern was really good all season long, especially on defense, but the problem I’m having was that the offense wasn’t overly convincing for much of the year and that’s not the issues that we have with the Ohio State Buckeyes as the offense has been electric for the Buckeyes once again. This is a lot of points, but I just don’t see Northwestern doing enough to keep it within the number. Ill lay the points with Ohio State in shwat’s a lean at best.