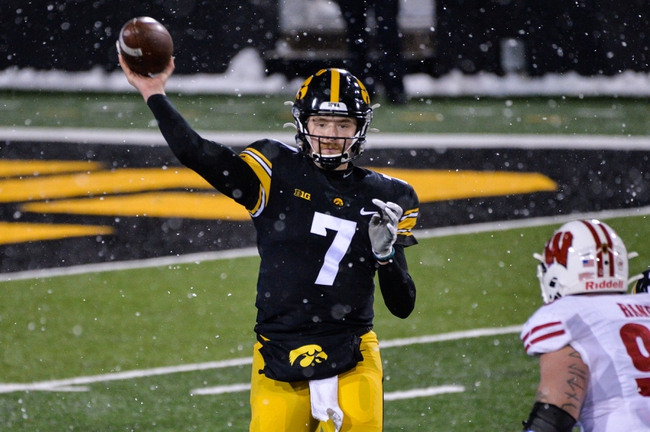 The Michigan Wolverines and the Iowa Hawkeyes meet in a Big Ten conference college football matchup from Kinnick Stadium on Saturday night.

The Michigan Wolverines come into this game looking to get past a frustrating season after going 2-4 following a 27-17 loss to Penn State as well as having games against Maryland and Ohio State cancelled. Joe Milton has thrown for 1,077 yards, 4 touchdowns and 4 interceptions on 56.7% passing while Cade McNamara has thrown for 425 yards and 5 touchdowns on 60.6% passing. Hassan Haskins leads the Wolverines with 375 rushing yards and 6 scores while Xach Charbonnet has 124 rushing yards. Ronnie Bell leads Michigan’s receiving group with 26 grabs for 401 yards while Cornelius Johnson has 254 receiving yards and Giles Jackson, Roman Wilson and Nick Eubanks all have 100+ receiving yards this season. On defense, Josh Ross leads the Wolverines with 53 total tackles including 28 solo tackles while Daxton Hill has a team-high 29 solo tackles on the year. Carlo Kemp and Kwity Paye each have a team-high 2 sacks for Michigan this year.

The Iowa Hawkeyes will try to finish the season on a roll and extend their current five-game winning streak which has Iowa at 5-2 following a 28-7 win over Wisconsin last time out. Spencer Petras has thrown for 1,569 yards, 9 touchdowns and 5 interceptions on 57.1% passing while Tyler Goodson leads the Hawkeyes in rushing with 762 rushing yards and 7 touchdowns and Mekhi Sargent has 432 rushing yards with 7 touchdowns as well this season. Ihmir Smith-Marsette leads Iowa’s receiving group with 345 receiving yards and 4 touchdowns while Sam LaPorta has a team-high 27 catches for 271 yards and Brandon Smith has 231 receiving yards this season. Four other Iowa receivers have at least 100 receiving yards as well this season. On defense, Nick Niemann leads the Hawkeyes with 77 total tackles including a team-high 37 solo tackles while Jack Koerner has a team-high 3 interceptions and Daviyon Nixon and Chauncey Golston share the team lead with 5.5 sacks apiece this season.

I’ve seen nothing up to this point that makes me want to even consider Michigan here on top of my dislike for Jim Harbaugh as a head coach and why Michigan chose to extend his contract is beyond me. Iowa on the other hand is rolling along right now with five straight wins thanks to timely offense and rock solid defense, two things that Michigan does not have right now. I think this game plays out how the last month has gone. Iowa wins big and Michigan gets bumped out with a thud. I’ll lay the points with Iowa at home in this one.