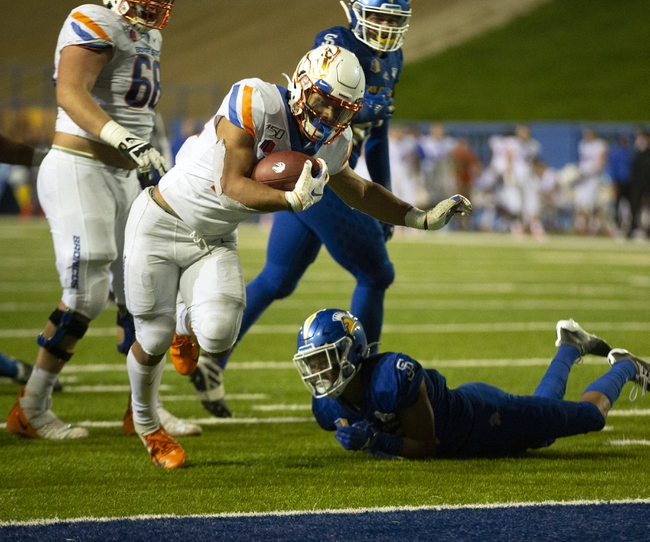 The San Jose State Spartans make their first trip to the Mountain West title game after finishing the year with a 6-0 record to finish atop the Mountain West conference standings. Nick Starkel has thrown for 1,463 yards, 13 touchdowns and 4 interceptions on 56.3% passing while Tyler Nevens leads the Spartans in rushing with 454 rushing yards and 5 scores and Kairee Robinson has 246 rushing yards this season. Bailey Gaither leads San Jose State’s receiving group with 36 grabs for 627 yards and 4 touchdowns while Tre Walker has 31 catches for 409 yards and 3 scores and Derrick Deese Jr. and Isaiah Hamilton each have 100+ receiving yards with Deese Jr. logging 4 receiving touchdowns as well. On defense, Kyle Harmon leads the Spartans with 67 total tackles including a team-high 41 solo tackles while Tre Jenkins has a pair of interceptions. Cade Hall leads San Jose State with 8 sacks while Viliami Fehoko has 5 sacks for the Spartans’ defense this year.

The Boise State Broncos make the conference championship game for a record 6th time and 4th straight year hoping for a 4th conference title game win and 3rd in the last 4 seasons after finishing the year with a 5-1 record. Hank Bachmeier has thrown for 929 yards, 6 touchdowns and 2 picks on 66.1% passing while Andrew Van Buren leads the Broncos in rushing with 356 rushing yards and 8 touchdowns. Khalil Shakir has a team-high 46 catches for 634 yards and 6 touchdowns while CT Thomas has 17 grabs for 322 yards. On defense, Riley Whimpey leads the Broncos with 54 total tackles while Shane Irwin has a team-high 6 sacks on the year.

I get Boise State being favored because of their history, experience and pedigree of a consistent spot in the Mountain West title game. However, San Jose State was anything but a pushover this entire season and I just think that this is a case of too many points even for a title game. Two of the last three title games were decided by a field goal and I think that’s the case here. Give me San Jose State and the points in this one.