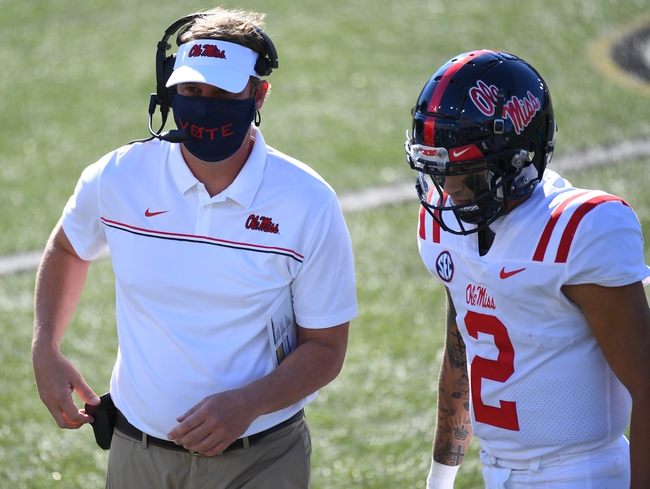 Ole Miss comes into this one at 4-4 so far. The Rebels are riding a three-game winning streak, taking out Vanderbilt, South Carolina and MS State in that trio. As for LSU, they’re 4-5 this season. The Tigers had lost consecutive games to Texas A&M and Alabama but got a win over Florida last weekend. Check back all season long for free college football picks at Sports Chat Place.

Ole Miss had the misfortune of facing some tough teams in their first five games (Florida, Alabama, etc.) but over the last three outings the Rebels have been able to show their stuff. Mississippi beat Vanderbilt 54-21 on Halloween, and in the two games since it’s been wins over South Carolina 59-42 and MS State 31-24.

In the win over the Bulldogs, Mississippi quarterback Matt Corral posted 385 yards with two touchdowns and Jerrion Early led the rush with 93 yards and a TD from 18 carries. Elijah Moore had a great day receiving for the Rebels with 12 receptions for 139 yards.

Over on the LSU side, they’ve suffered from the same problem in tough matchups. There have been a handful of blowouts and a couple of tight losses as well. The Tigers lost consecutive games to Texas A&M 20-7 and Alabama 55-17 but got a great victory over Florida 37-34 this past weekend.

In the win over the Gators, LSU’s Max Johnson threw for 239 yards with three touchdowns on a 21-of-36 line. Kayshon Boutte was the top receiver for the Tigers on five catches, 108 yards and a TD, while Chris Curry led the rush on 64 yards from 17 carries.

PICK: I’m going to stick with Ole Miss. This one should be a pretty darn good matchup, though. The Tigers had scored more than 17 points just once in their previous four games before the win against Florida, but looked really solid all around in that outing. That said, Mississippi can put up the points when they get going, and they’ve hit 31 or more in each of the last three. I like this one to be a high-scoring affair, and I think the Rebels can eke out a cover.