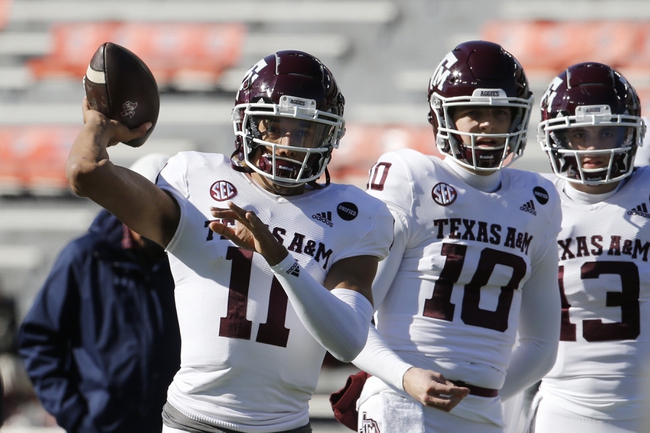 Texas A&M enters this one at 7-1 on the season. The Aggies are riding a six-game win streak, taking out South Carolina, LSU and Auburn in their last three outings. As for Tennessee, they’re 3-6 this season. After skidding on a six-game losing streak, the Volunteers got a win this past weekend versus Vanderbilt. Check back all season long for free college football picks at Sports Chat Place.

Texas A&M is on a nice run during this six-game winning streak, putting up some impressive performances. Since falling to Alabama 52-24 way back on October 3, it’s been nothing but victories for the Aggies. Those wins came 41-38 over Florida, 28-14 over MS State, 42-31 over Arkansas, 48-3 over South Carolina, 20-7 over LSU and 31-20 against Auburn.

Over on the Tennessee side, it’s been a pretty rough year. The Vols opened up with consecutive wins, but then fell to Georgia, Kentucky, Alabama, Arkansas, Auburn and Florida in their next half-dozen games. The good news is that Tennessee got a win this past weekend over Vanderbilt 42-17.

In the win over the Commodores, Tennessee quarterback Harrison Bailey posted 207 yards with two touchdowns, and Eric Gray led the rushing attack on 74 yards from 13 carries. Velus Jones was the leading receiver for the Volunteers with seven catches for 125 yards and two touchdowns.

PICK: I’m going to stick with Texas A&M. Tennessee has had the misfortune of playing some tough teams over the past couple months, and in the last five games of their losing streak the Vols never scored more than 19 points. The Aggies have been scoring well lately, with 28 or more points in five of their last six games. Tennessee is going to have to maintain a torrid offensive pace to keep up on the scoreboard here, and I don’t think they’ve got the gas to get into a cover.