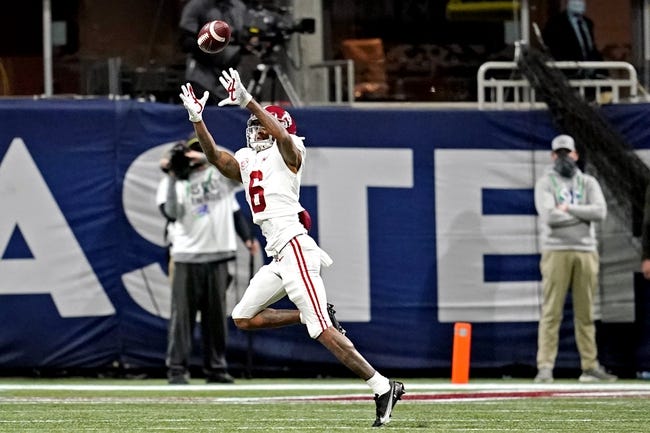 The Notre Dame Fighting Irish face off with the Alabama Crimson Tide in college football action from AT&T Stadium in the Rose Bowl College Football Playoff on New Year’s Day in Arlington.

The Alabama Crimson Tide come into this one as the top seed in the playoff bracket after posting an 11-0 record in the regular season with a 52-46 win over Florida in the SEC championship game. Mac Jones has thrown for 3,739 yards, 32 touchdowns and 4 interceptions on 76.5% passing while Najee Harris has rushed for a team-high 24 rushing touchdowns. Brian Robinson Jr. has 404 rushing yards and 6 scores while DeVonta Smith leads Alabama in receiving wih 98 grabs for 1,511 yards and 17 touchdowns while John Metchie III had 782 receiving yards and 6 scores as well this year. On defense, Christian Harris and Dylan Moses tied with a team-high 68 total tackles with Harris logging a team-high 48 solo tackles and 4.5 sacks while Moses added 1.5 sacks and an INT. Malachi Moore led Alabama with 3 interceptions while Will Anderson Jr. had a team-high 7 sacks. Christian Barmore had 6 sacks and Christopher Allen had 5 sacks.

The Notre Dame Fighting Irish enter the playoffs as the #4 seed after finishing their run as a temporary football member of the ACC with a 10-1 record, going unbeaten in the first ten games before a 34-10 loss to Clemson in the conference championship game. Ian Book has thrown for 2,601 yards, 15 touchdowns and a pair of interceptions while Kyren Williams has rushed for 1,061 yards and 12 touchdowns while Chris Tyree has rushed for 480 yards with 4 TDs and Book has 430 rushing yards with 8 TDs. C’Bo Flemister has 299 rushing yards with 5 TDs while Javon McKinley has 697 receiving yards with 3 scores on 40 catches for led the Irish in receiving. Ben Skowronek, Michael Mayer and Avery Davis each have 300+ receiving yards while Williams and Tommy Tremble each have 200+ receiving yards as well. On defense, Kyle Hamilton led Notre Dame’s defense with 56 total tackles including a team-high 45 solo tackles while Jeremiah Owusu-Koramoah was right behind with 55 total tackles. Adetokunbo Ogundeji had a team-high 6.5 sacks while Isaiah Foskey chipped in 4.5 sacks for Notre Dame this season.

The bunch of points with a top-tier team like Notre Dame are tempting when you consider the defensive issues that have shown up at times for Alabama against teams like Ole Miss and Florida. The difference is that Ole Miss and Florida tend to be more pass-heavy while Alabama’s defense should thrive against Notre Dame’s ground attack with Bama owning the 12th-best run defense in the country. I look for Mac Jones, Najee Harris, DeVonta Smith and the rest of the Crimson tide to run roughshod on the Irish, winning this one by at least 3-4 scores, so give me Alabama and lay the points.