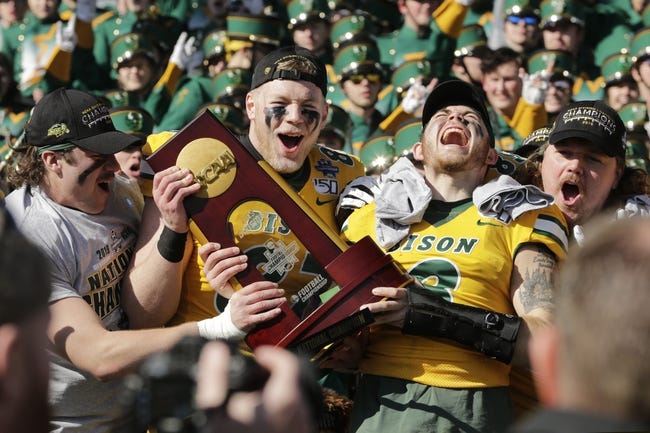 The Youngstown State Penguins are coming off a 6-6 season and finished winless on the road. The Youngstown State Penguins averaged 30.4 points and 378.2 yards while allowing 26.8 points and 339.1 yards. Joe Craycraft should replace Nathan Mays at quarterback, and he threw for 893 yards and eight touchdowns last year. Youngstown State lost a lot of production at wide receiver and running back, but having an experienced quarterback under center certainly helps ease any transition. Defensively, Zaire Jones returns after 60 tackles, DeMarko Craig Jr. had five sacks and Terray Bryant had two interceptions. Youngstown State has to find playmakers on the offensive side, but it has its quarterback and enough experience on defense to be competitive out of the gate.

This is a lot of points to lay in a season opener, but it's expected given that the North Dakota State Bison are widely considered the best team in the FCS year after year and they beat another good team in Central Arkansas despite not playing their best. The Youngstown State Penguins should be solid defensively, but they lost a lot of production on the offensive side and it raises questions if they have enough to compete on the road in this spot.

The North Dakota State Bison have consistently been money over the yeas. I'll lay the chalk.