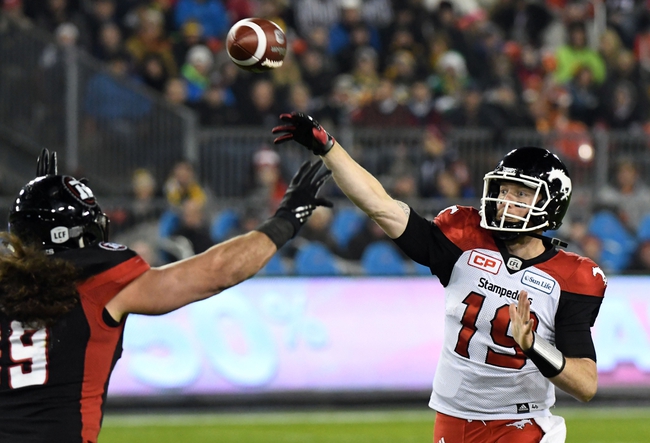 The Line: Stampeders -10 -- Over/Under: 55 Click to Get Latest Betting Odds

The Toronto Argonauts look for back-to-back wins for the first time this season after losing four of their last six games. The Toronto Argonauts have lost their last three road games. Ricky Ray is completing 69.9 percent of his passes for 2,798 yards, 14 touchdowns and five interceptions. Ray has eight touchdown passes in his last three games. S.J. Green and Armanti Edwards have combined for 1,342 receiving yards and seven touchdowns while Anthony Coombs has 47 receptions. The Toronto Argonauts ground game is averaging 70.2 yards per contest, and Brandon Whitaker leads the way with 276 yards and on 58 carries. Defensively, Toronto is allowing 25.7 points and 335.3 yards per game. Bear Woods leads the Toronto Argonauts with 53 tackles, Victor Butler has seven sacks and Cassius Vaughn has two interceptions.

Calgary has won the last seven meetings against Toronto and many of those games weren't that close. The Calgary Stampeders are also playing like the team from last season at the moment and have been really good against the number. The opposite can be said for the Toronto Argonauts, who haven't won back-to-back games this season and have failed to cover in 23 of their last 32 games. While the spread is high, Calgary should be able to open this game up in the second half.