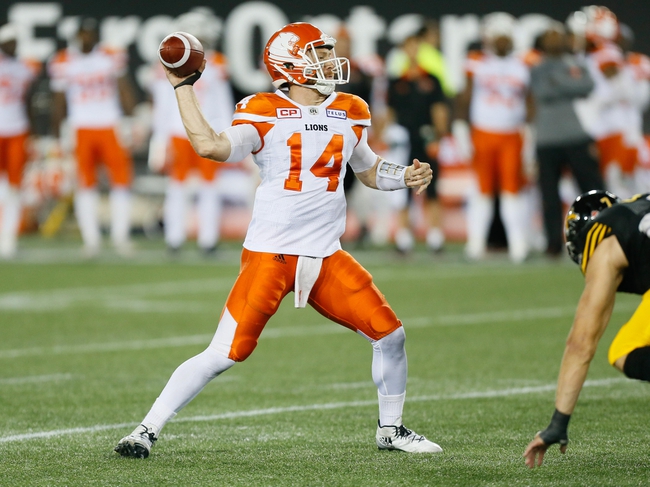 The Ottawa Redblacks and BC Lions meet Saturday in CFL action at the BC Place.

The Ottawa Redblacks could use a feel good victory here after losing three of their last four games. The Ottawa Redblacks have won three of their last four road games. Trevor Harris is completing 70.6 percent of his passes for 3,724 yards, 23 touchdowns and seven interceptions. Harris and Drew Tate have combined for 25 touchdown passes this season. Greg Ellingson and Brad Sinopoli have combined for 2,221 receiving yards and 11 touchdowns while Diontae Spencer has 56 receptions. The Ottawa Redblacks ground game is averaging 94.1 yards per contest, and William Powell leads the way with 743 yards and three touchdowns. Defensively, Ottawa is allowing 23.9 points and 388.3 yards per game. Taylor Reed leads the Ottawa Redblacks with 82 tackles, Avery Ellis has five sacks and Antoine Pruneau has three interceptions.

The BC Lions also need a nice win here after losing five of their last six games. The BC Lions have split their last six home games. Travis Lulay is completing 73.3 percent of his passes for 1,693 yards, 10 touchdowns and seven interceptions. Lulay and Jonathon Jennings have combined for 16 touchdown passes and 19 interceptions this season. Bryan Burnham and Emmanuel Arceneaux have combined for 1,671 receiving yards and seven touchdowns while Nick Moore has 28 receptions. The BC Lions ground game is averaging 98.9 yards per contest, and Jeremiah Johnson leads the way with 752 yards and eight touchdowns. Defensively, BC is allowing 26.4 points and 377 yards per game. Solomon Elimimian leads the BC Lions with 95 tackles, Craig Roh has eight sacks and Ronnie Yell has three interceptions.

Obviously neither one of these teams has had much success as of late, but the home team has won four of the last six games between Ottawa and BC. The Lions are also averaging 25.7 points in their last three games while the Redblacks are producing just 18.3 points. Add the fact the Lions are coming off a bye while the Redblacks are fresh off a tough loss to the Saskatchewan Roughriders, and you have to give the edge to the rested home team in this spot. I'll take the Lions and the reasonable number.